Margaret McMillan pioneered the concept of open-air education at the turn of the 19th century - perhaps we should heed her advice now? 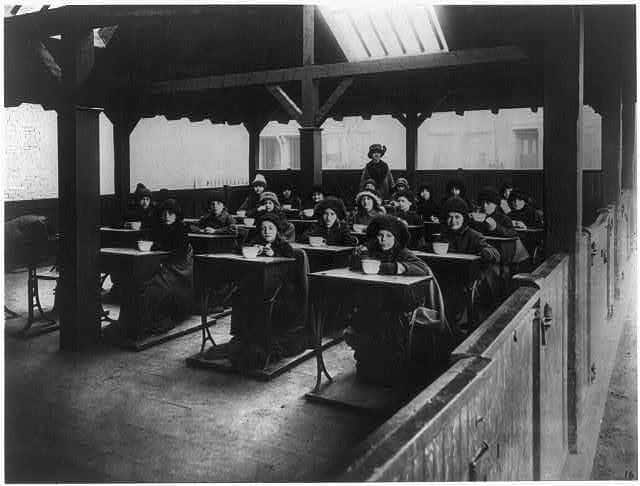 Margaret McMillan was an education reformer who worked among deprived communities in London and Bradford at the turn of the 19th century. While she inhabited a very different society to the one in which we are now living, her innovations to improve children’s health hold many lessons for us. This is especially true this week, as we send children back into schools in which, despite infection levels rising and the majority of 12 to 16 year olds being unvaccinated, the government has removed all statutory infection prevention measures.

McMillan grew up in Inverness, moving to London in the late 1880s, during which time she developed her skills as a writer and orator for the Labour movement, speaking regularly at Hyde Park Corner. When this led to dismissal by her employer, she moved to Bradford, where she spent the next ten years delivering socialist lectures, contributing to the birth of the Parliamentary Labour Party.

She was given a place on the Bradford School Board as a Labour representative. She quickly came to the conclusion that it was impossible to educate a tired, dirty, infested, diseased and hungry child, and that by imposing compulsory schooling on deprived children, a well-meaning state was actually adding to their misery. It was largely due to McMillan’s campaigning that Bradford became the first school board in Britain to provide medical inspection, free school meals and school baths in some of its poorest areas.

After new legislation in 1902 abolished the school boards and gave the responsibility for education to local authorities, to which women could not be elected at that time, Margaret moved to live with her sister Rachel in Deptford, South London. In 1906, they led a deputation to parliament to lobby for compulsory medical inspection for children in school; this was granted in 1907.

The sisters’ campaigning resulted in several experiments to improve the health of the children in the local area. This included a pioneering school clinic and, eventually, overnight camps which offered deprived children a nutritious evening meal and an opportunity to sleep in outdoor shelters in the fresh air, rather than in over-crowed bedrooms where infectious diseases such as tuberculosis and diphtheria ran rife.

As this initiative unfolded, McMillan further contemplated the unhealthy nature of “millions of children sat in huge classrooms, diseased, suffering”. In her book The Camp School, she elaborates on the point that stuffy over-crowded, poorly ventilated classrooms were equally responsible for spreading disease alongside crowded slum homes.

The McMillans subsequently scraped together sufficient charitable donations to start an experimental ‘camp school’ for children from six to 14 years old, to ensure that children were able to receive a significant proportion of their education in the open air. McMillan reported that the school was a success in terms of improving the children’s health, but the initiative began to struggle due to a lack of donations and the general societal upheaval that occurred with the advent of the First World War.

McMillan had also begun to think that bringing the children into an open-air regime before they were old enough for school would reap greater dividends, as a preventative rather than therapeutic measure. She maintained that this would place them into “the right kind of environment … sunshine, fresh air and good food before they become rickety and diseased”.

The resulting ‘baby camp’, which became known locally as ‘the nursery’ became the initiative which would propel McMillan to national and international fame, even to the extent of a Pathé News article. The transformation in the children’s health and readiness to learn was by all accounts remarkable.

The nursery was visited by national figures such as Prime Minister Stanley Baldwin, George Bernard Shaw, early female MP Nancy Astor, and many times by Queen Mary, who was rumoured to have contributed a large sum to the charity that underpinned its ongoing existence. Baldwin described his visit as “a revelation”. When her sister Rachel died in 1917, Margaret renamed the baby camp ‘The Rachel McMillan Open Air Nursery’, and it remains on the same spot, under the same name to this day.

In the dedication of her book The Nursery School, McMillan says that her sister Rachel once declared that the motto for all their schools should be “educate every child as if he were your own”. And it is here where we pick up on the relevance of the McMillans to the children of the present day.

The best classroom in a pandemic

No parent would have chosen to have their child suffer through 18 months of on-and-off lockdown, while the Department for Education offered no innovations or leadership to put in place measures that might keep them safe and in some type of collective educational activity. And no parent would have wanted to watch their child go through this, knowing that elsewhere, such as in Scandinavia, governments responded to this challenge over a year ago.

There is no dichotomy about the benefits of open-air activity for reducing infection. McMillan demonstrated this in her experimental schools in the heart of London over a century ago. And there is no controversy about the benefits of open-air activity and ventilation, unlike with masking and vaccination. So why is the UK government still insisting that unvaccinated children must return to indoor classroom and assembly halls, when the infection rate is much higher than it was last year?

Perhaps it is due to ministers’ inability to move beyond a very narrow concept of how children might be educated, and their failure to consult widely enough about this?

But really, we are now beyond such speculation. As our children start to return to stuffy classrooms and packed assembly halls – with families facing yet more miseries of Covid-19 infection, including many who will develop long covid – perhaps we could pause to listen to Margaret McMillan’s wise voice once again:

…. and most especially, in the middle of a pandemic.