Despite intensive negotiations underway to resolve the issues with the Northern Ireland protocol and the Irish border, there remain significant areas of disagreement 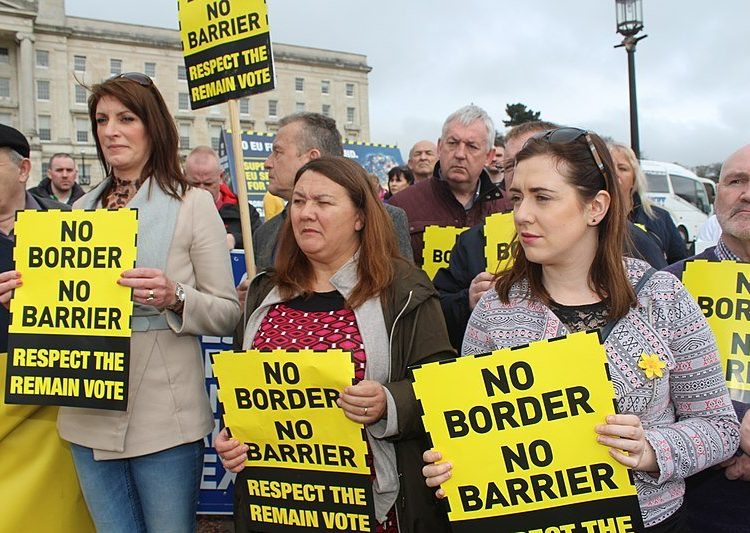 No Border No Barrier – https://commons.wikimedia.org/wiki/File:No_Border_No_Barrier.jpg

The Irish border is casting a long and ominous shadow over Brexit with intensive negotiations underway on the Northern Ireland protocol at a technical level to find ways of smoothing trade across the Irish Sea. According to Tony Connelly at Irish broadcaster RTE, there is said to be “broad progress” with more than 25 areas of contention being identified including food, medicines, the movement of pets and plants, and VAT on second hand cars and steel imports.

There is however, no meeting of minds about the most vexed issue of all: food safety and animal health. This is particularly the case when it concerns the movement of large, mixed consignments of food from GB depots to supermarkets and retailers in Northern Ireland.

If anything, the two sides are digging in ahead of a key meeting next Wednesday between European Commission Vice President Maros Šefčovič and Lord Frost.

Appearing on the Andrew Marr show last Sunday, the newly elected leader of the DUP, Edwin Poots rejected the idea of a Swiss-style veterinary agreement that would alleviate 80 percent of the SPS (sanitary and phytosanitary) checks, apparently because it would only be a “temporary solution”.

Lord Frost has already ruled it out as a permanent answer on the grounds that UK sovereignty would be compromised if we were to be locked into alignment with EU food standards.

In turn, the UK is pushing for an equivalence arrangement in which the EU would recognise UK food production standards as being equivalent to its own, something the EU has already rejected and which would still require export health certificates anyway.

Neither Poots nor Frost offered any alternatives, which is a source of huge frustration on the EU side with Vice President Šefčovič complaining, “To be quite honest all these solutions are coming from our side … from the UK side we still do not have the basic answers”.

Frost calls for “common sense” from the EU

On a visit to the province on Tuesday and Wednesday to meet business and community leaders, Lord Frost called on the EU to show more “common sense” when dealing with the problems arising from the Northern Ireland protocol.

The peer seems to be trying to distance himself from his own role in negotiating both the Northern Ireland protocol and the trade and cooperation agreement. In a newspaper article last month he accused the EU of taking a “a very purist view” and wanting to “treat goods moving to Northern Ireland from the rest of the UK in the same way as the arrival of a vast Chinese container ship at Rotterdam” something he says we “did not anticipate” when the protocol was agreed.

Frost was told this week about reduced availability of choice, cancelled deliveries, products being pulled and interference with the movement of goods. As usual, he tried to suggest the EU’s demands that the terms of the protocol be met somehow meant it was not totally committed to peace in Northern Ireland.

“The protocol relies on cross-community support but this situation does risk undermining that. Our number one priority as the UK Government is protection of the Good Friday Agreement in all its dimensions, north-south and east-west, and that is the top priority of the protocol itself.

“We hope the Commission share that view, although if so, they aren’t always as clear about it as they could be.”

Lord Frost has previously suggested progress is needed by the middle of July, although he has not yet set a deadline. The EU’s ambassador to the UK, Vale de Almeida, has firmly rejected any attempts to blame the EU for unrest in Northern Ireland and called for ‘more engagement’ from the UK.

The BBC also reported that the ongoing technical talks have made “limited progress”, with viable solutions in sight for just two issues, and partial solutions being seen as ‘possible’ in perhaps half a dozen other areas. But on the majority of the 30 issues that they suggest are being discussed, the two sides remain far apart, particularly on the possibility of an agri-food agreement.

One might legitimately ask how we came to be in such a mess over the Irish Sea border and how no one saw it coming. The answer is: ignorance.

In March this year, UK in a Changing Europe, as part of a series, published an interview with Simon McDonald former British ambassador to Germany and permanent under secretary at the Foreign Office from 2015 to 2020.

He recalls the first conversation he had with Julian King, who succeeded Jonathan Hill as the British European commissioner in July 2016. King came to see him and said, among other things (and with considerable foresight as it turned out):

“Ireland will be, come the day, the critically important issue, and there is nothing being thought about that’s going to solve that key problem.”

So, we know that in the run up to the vote, the Irish border issue was not even being considered and yet, after five years, it remains Brexit’s Gordian knot.

An article by Sam McBride in The Newsletter, adds to the sense of ignorance at the highest levels of the British government about the border problem, even after the referendum result and well into 2017.

The title of his piece: A broken Whitehall which knew more about China than about NI, comes from quotes by Philip Rycroft, the senior civil servant who was the permanent decretary at the Department for Exiting the European Union (DEXEU). He said that “Northern Ireland and the governance of Northern Ireland has always been really complicated in Whitehall”.

“It is quite extraordinary how little Whitehall understood about its own country. I think that remains the case today, in terms of the different elements that make up the United Kingdom”, he added.

Former chancellor Philip Hammond admitted that more than a year after the referendum, the scale of the Northern Ireland problem had still not been appreciated by Mrs May “or anyone else at the top of government”.

Sir Jonathan Faull, a senior European Commission official at the time of the referendum, said: “The focus on Northern Ireland came far too late, despite warnings from me and others way back that people should start thinking very carefully about what would happen in Northern Ireland, particularly if different parts of the UK voted differently. I wouldn’t say we’d thought all that through fully.”

The DUP are now paying the price

Whitehall wasn’t the only place where ignorance of the potential border issue was widespread. The DUP were also guilty of it and are now paying the price.

In 2019, when MLA (member of the legislative assembly) Jim Wells temporarily had the party whip removed for speaking out against the leadership, he revealed to The Belfast Telegraph the DUP’s own cavalier approach to deciding its stance in the referendum.

At a meeting in late February 2016, the decision to support Vote Leave was made “within minutes” and without any assessment on how a leave win would impact Northern Ireland, although the meeting was said to have lasted several hours and presumably covered plenty of other issues.

“Once we established the principle of leaving Europe the modalities would work out later … we were just concentrating on the getting out from under the yoke of the EU”, Wells said.

These “modalities” are now being played out in real time and threaten the peace process in Ireland just as many had predicted.

The party has slumped in the polls, with support falling to 16 percent while republicans in Sinn Féin are on 25 percent. This could see leader Michelle O’Neill become Northern Ireland’s first minister at the next election in May 2022.

The DUP appears bitterly divided. A meeting to confirm Edwin Poots as the new leader last week saw “heated exchanges” and a series of high-profile walk outs before his acceptance speech, including by deposed leader Arlene Foster.

Calls this week by Mr Wells for DUP Members in South Down to “back Edwin Poots or shut up” have led to fears of an exodus.

Tesco has asked some suppliers to ship food across the Irish Sea themselves into the Republic of Ireland, from where they will then distribute stocks across the land border into Northern Ireland.

Other supermarkets are expected to follow suit, but suppliers were said to be dismayed and fear their companies will be landed with extra costs as a result.

Peter Hardwick of the British Meat Processors Association, which represents fresh meat suppliers, said that the cost of delivering goods to the European Union had doubled on average since Brexit.

He said: “That added cost has to be paid for by somebody. Inevitably it means it’s being pushed onto suppliers, and all they can do is look at where they recover that cost.”

You can be sure these costs and others, that may be even higher and not measured by money, will eventually be paid by the people of Northern Ireland.