Joe Stanley, a farmer from the East Midlands, outlines the huge differences between our own UK food standards and those in the USA. 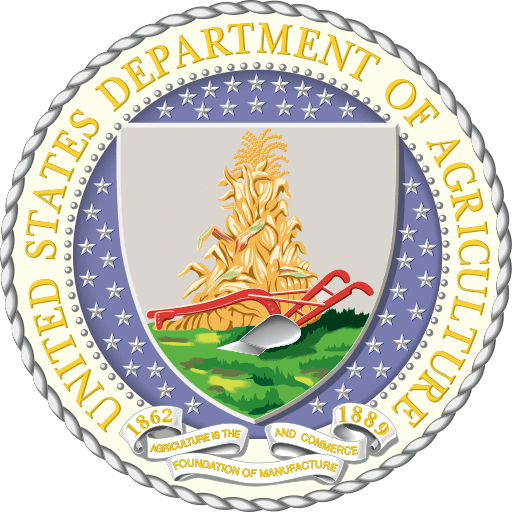 U.S. Government. The original seal was designed by A. H. Baldwin, a USDA artist. / Public domain

Joe Stanley is a farmer from the East Midlands. He describes himself as a conservationist, columnist and advocate for sustainability in food, farming & the environment. In a Twitter thread using data from a briefing by the National Farmers’ Union, he outlines the differences between our own UK food standards and those in the USA, which the Americans would like to impose on us in a future trade deal.

He sets out starkly how the US achieves lower costs and higher productivity using methods and practices outlawed in Britain, sometimes for nearly forty years. British farmers would be forced to adopt lower standards in order to compete, or face going out of business.

Accepting US standards would mean effectively allowing the US Department of Agriculture to set our standards. At least inside the EU we were able to influence European standards, there will be no such influence in Washington. This is not taking back control but giving it up. It is not something a sovereign nation should be doing.

Yorkshire Bylines will let Joe’s tweets speak for themselves (reproduced here with his permission):

As we’ve already highlighted elsewhere, some 19 MPs from the Yorkshire and Humber region voted against an amendment to the Agriculture Bill that would have prevented the government agreeing any free trade deal that allowed the import of lower-quality agricultural and food products into this country. The amendment was defeated. This leaves farmers in Yorkshire and elsewhere facing an uncertain future when the Brexit transition period ends, which could be as soon as 31 December.

Research conducted by Focaldata on behalf of cross-party campaign group Best for Britain and Hope not Hate shows that the majority of people in the UK now expect the transition period to be extended, as countries round the world attempt to grapple with the coronavirus pandemic. Various petitions are available that call for such an extension, including ones from Best for Britain HERE and March for Change HERE.