Franco-British relations have waxed and waned for centuries. Does the current tension serve a political purpose both sides of the Channel? 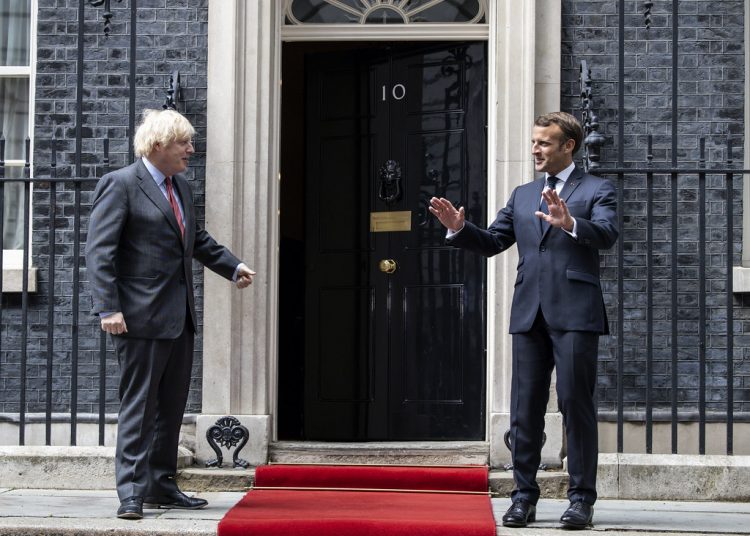 France 24, a state-owned news channel, reports that, “The French president, who is hoping to win re-election in May, needs an external enemy to display his leadership qualities”. The UK-based think tank, Chatham House, agrees that this very public row between the French president and the prime minister has “helped their respective images at home”.

It is December 2011 and Sarkozy and Cameron are in full dispute over the fallout of the financial crisis in the Eurozone.

Plagued by wars and insults, yet bound by mutual fascination, Franco-British relations have waxed and waned for centuries. Both are still major powers, but no longer empires. Both are strong in military and intelligence terms, globally respected, and seeking new areas of influence.

The two countries are uniquely entwined. Just under a third of our entire vocabulary is French. Our histories are inextricably interwoven. We each experienced immense power, and developed a coexisting exceptionalism; like siblings who grow up to resent yet respect the other.

This episode, ‘the one with the fish’, could be a continuation of that theme.

Fishing represents too little financial clout to merit this focus. But the opportunity to twist a few words and suggest that France wants to punish Britain is like manna from heaven for a beleaguered Johnson, facing catastrophic covid rates, the raw sewage debacle, the supply chain crisis and corruption scandals in Westminster.

On the other side of the Channel, Macron – still smarting from the Australian submarine fiasco – is facing an election. The rise of new characters on the French far right means he has to flex his nationalist credentials extra hard.

It might just be a handful of licences for some battered old boats, but there’s nothing like a battle with the oldest enemy to stoke the fires of patriotism.

The relationship with France: ‘twas ever thus

Around ten years ago, I attended a reception thrown by the French Embassy in London. Sitting directly behind President Sarkozy, Prime Minister David Cameron, and their respective spouses, I witnessed Carla Bruni, Sarkozy’s wife turn and without saying a word, pick some offending speck from Samantha Cameron’s lapel. She then proceeded to flick it across the room before returning her attention to the stage.

That little gesture spoke a thousand words. On the face of it, a patronising act of faux friendship, but more profoundly, a declaration of utter confidence in the pecking order. Would she have done that to Michelle Obama, her American equivalent? Of course not.

But behind the theatricals, France and the EU are miserably aware that Johnson needs to keep the Brexit fires burning and they are preparing for the long haul. Britain is seen as constantly trying to evade the consequences of its decision to leave the EU, and backtracking on the agreements it subsequently signed.

In France, to say Johnson’s credibility as a world leader is at an all-time low is an understatement. In his last New Year’s Eve presidential address to the nation, Macron told France that Brexit was based on “lies and false promises”. This was an undisguised swipe at the current British government and the person who leads it.

Macron is known as a passionate Europhile. He is not interested in making it easy for Britain, especially as he sees the Brexit project as having dubious credentials. He wants Britain to abide by the deal it negotiated, not to keep claiming relief from it in order to avoid the inevitable damaging consequences – the existence of which Johnson’s Brexit campaign completely denied.

That’s what was communicated to Von der Leyen in the infamous French letter from Prime Minister Jean Castex.

It was clumsily phrased maybe, but Castex did not suggest, as Politico’s Alex Wickham mistranslated in his Twitter thread on 31 October, that France, or the EU, cause that damage or “punish” the UK.

The Britain-France love-hate relationship … and Germany

The British love going to France – the countryside, the food and wine, buying dream holiday homes for the price of a studio flat in Harrogate. Similarly, the French love Britain, with its quirky habits, its tea, fish and chips, Scotch and gin, its characteristic sang froid, cool in a crisis, etc.

Politicians will come and go but our nations, united by our differences, will remain, as will the love-hate relationship we have enjoyed for over 1000 years.

Wouldn’t it be comforting to end it there?

In the wake of the catastrophic wars of the 20th century, European nations, led by France and Germany, set out on a mission to change the course of history, so that such atrocities would not reoccur. This inevitably meant ceding individual national dominance in favour of a cooperation of sovereign states.

But even inside the EU, Britain remained trapped in the aspic of Empire. Instead of working towards a united future with its neighbours, which required acceptance of being more or less ‘equal’, we constantly set ourselves apart. Our narrative remains the reiteration of past glories with a focus on former colonies as future trade partners. The envisaged trading relationship with the Commonwealth was actually titled ‘Empire 2.0’ in 2017 by Whitehall officials, before being roundly mocked by the countries involved.

Nicholas Duncan of the Atlantic Council in Washington DC, who advises a French foreign policy think tank, wrote that:

“Europe is a family where France is the wife, Germany is the husband and Britain is like the jilted suitor standing outside shouting ‘your marriage will never work!’”

What next for the Brexit journey?

Britain’s strategy with the EU throughout Brexit has been to attempt to deal with individual states instead of the EU as a whole. France is not ignorant of these divide-and-conquer tactics in this dispute, as the UK prefers to treat this issue as just a Franco-British row. In reality, the issue is Britain’s compliance with the agreement with the EU as a whole, which is why Castex wrote to Ursula Von der Leyen.

This is just the prelude to what lies ahead with the Northern Ireland protocol and the strong possibility of Article 16 being triggered. Until we have a change of government, this show will run and run.