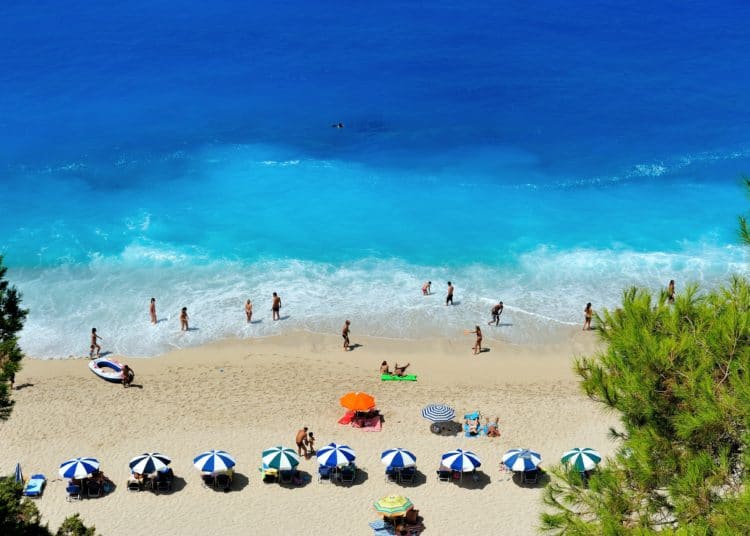 Photo by Nikos Zacharoulis on Unsplash

Said to be a student of politics, perhaps he has read MP Hector Hughes’s (Aberdeen North) perspicacious contributions to the great 1969 Foreign Travel Allowance debate:

“It used to be said that it was necessary for one’s education to travel abroad. That is no longer necessary … we have the advantages of countries all over the world without travelling. As Shakespeare said, we have ‘England, bound in with a triumphant sea. Whose rocky shore beats back the envious siege’. There is no need today to go abroad to obtain what used to be called the advantages of travel.”

Mr Hughes will later return (hoorah!) but let us turn from noble literature to very basic mathematics. In 2019, holidaying Britons took out of the UK around forty‑four billion pounds, matching almost exactly predicted government borrowing for 2019/20. Now, forty‑four billion pounds may not be much to you and me but with the national debt already over two trillion (a historic high, exceeding like a failing state its annual GNP), truly every little counts.

This year’s borrowing may add three‑hundred billion more. Capricious quarantines and threatened quarantines, plus insurance‑nullifying travel ‘advice’, have thus saved future generations of still-unborn taxpayers a rather useful sum. What an astute government! An explanation perhaps for why airlines beg in vain for the point‑of‑entry testing long‑obligatory elsewhere?

If such a plot seems too byzantine even for our brilliant leaders, maybe we should peek down a not‑too‑distant memory lane. In 1947, when the economy, remarkably, was much stronger than today, the Labour government enacted the Exchange Control Act to brake capital outflow from the Sterling Area. Individuals could spend £100 a year on overseas travel – a lot of money in 1947 but foreign travel then was solely for the rich (in 1947, workers were allowed only one week’s holiday and £100 was almost half a year’s pay).

In 1948, the travel allowance was completely withdrawn. Until its restoration in 1949, Europe was closed to everyone. The new Conservative government of 1951, facing a deficit on trade of 0.7 percent (last year’s trade deficit was 37 percen; this year’s rockets by the month) slashed the allowance first to £50 then soon to £25. Even the wealthy cringed. Although Barbados was available – it was in the sterling area – there went the precious Monte-Carlo week! The Churchill government, fraternally prodded and probably nostalgic for its own summer hols, took pity on their pals and gradually increased it to reach £100 again in 1954.

To the majority of Brits the sum was irrelevant. Few had ever heard of it. Throughout the fifties, most spent their one‑week break (those who could afford one) pacing rain‑swept promenades in Britain’s Blackpools, Scarboroughs, Morecombes and Brightons; maybe their managers one-upping it beneath Torquay’s fabled palms. Some, claimed MP Hughes, even reached Aberdeen. But by the 1960s, although £100 still needed dedicated saving, embryonic package tours to “where the sun shines brightly, where the sea is blue” – mostly by coach but increasingly by air – were giving thousands a taste for peacetime Europe’s mountains and beaches, of untried foods and real wines. Everything that millions today regard as an inalienable right.

This very un-British hedonistic migration, during one of our traditional pound-under-pressure crises, was condemned as a serious currency drain. Harold Wilson, who famously holidayed nowhere but the Scillies, in 1966 reduced the allowance again to £50.

This is how it (sort of) worked.

The overseas costs part of the package was subtracted from your £50. The tour provider certified the sum in your passport. For anything over you could buy travellers cheques which were recorded by your bank and noted in your passport. Independent travellers, after proving their identity, could splurge their entire £50 on cheques. Everyone could also export £15 in cash. Your lucky car (few owned one) enjoyed a £25-cash allowance of its own.

How it was viewed by much of the country emerges from parliament’s 1967 and 1969 debates.

Sir Gerald Nabarro (Worcestershire South): “I do not like being regarded overseas as lower than the Albanian tourist … neither do 5 million other British people”.

Stratton Mills (Belfast North): “British tourists are restricted to modest hotels costing less than £3 a day. If they want to go to a better hotel, they can afford to stay for only one week”.

Patrick Jenkin (Wanstead and Woodford): “The pleading of poverty of foreign exchange by British tourists in hotels and restaurants does not enhance confidence in Sterling or a government which causes its citizens to debase themselves into begging… millions of our people counting every centime, every pfennig, every lira and cent”.

John Peel (Leicester): “£15 pounds in cash can be exchanged only at a poor rate of exchange. It is something which people abroad are not very keen to have…”.

Some ignoble desperados actually attempted to smuggle out more, in shoes or socks or tucked beneath underwear. HM Customs could (and did) search your bags and your person. Secreted banknotes were confiscated and earned you a fine. Escaping Britain was frequently more stressful than getting back in with your few contraband bottles of wine.

My socks mostly remained legally skint, but when in 1970 I moved to Scandinavia, my two‑hundred pounds life’s savings voyaged near my private parts. (Need not have bothered; customs had almost abandoned body‑searching Brits who dared to go abroad.) The Foreign Travel Allowance was finally abolished in 1979.

In free-movement Europe, we believed such times could never return. Today, Covid-19 seals the border tighter than customs agents ever did but, with national debt soaring, the trade balance plunging, and the ‘get-Brexit-done/you’re done-for’ abyss unplumbed at our feet, would you bet against it?

To assuage that dismal prospect, please enjoy and applaud MP Hector Hughes’s (Aberdeen North) 1969 patriotic peroration: post‑Brexit compensations which might keep us still the envy of nations not so blest, even in a future without a Euro to our names.

“We need money at home. Our holiday camps need holiday workers and holiday makers. Our hotels need visitors and money. Aberdeen could do with more visitors … We should not pour our largesse abroad. We have at home all that we want. The other evening on television I had the advantage of seeing pictures of five counties. Butlins and other holiday camps offer not only education but enjoyment to people who stay at home. Let us stay at home.”

True, Aberdeen may soon take only Euros yet, from Margate to Mablethorpe, Southend to Southport, the MP’s stirring exhortation must equally include a magnificent medley of English resorts. Not your cup of tea? Well, don’t say Hector didn’t warn you.

Topsy-turvy times, indeed curiouser and curiouser, but from the ridiculous to sanity sublime: “There is another shore, you know, upon the other side. The further off from England the nearer is to France…” (Carroll today might well have written Europe.) Alas, should your sceptred isle start seeming uninhabitable, you may need a rubber dingy – that’s if your new blue passport, with or without body search, with or without quarantine, gets you as far as Kent.

Most of us do not have dual nationality but if you’re one of the favoured, still free to reach the mainland legally whenever you like, don’t forget commodious socks to stash your much devalued dosh. Bon voyage et bonne chance!

Cummings vs Ferrier: why the left’s fragmentation is its strength