The House of Lords European Union committee yesterday released a blistering report into the government’s shambolic management of the Northern Ireland protocol. 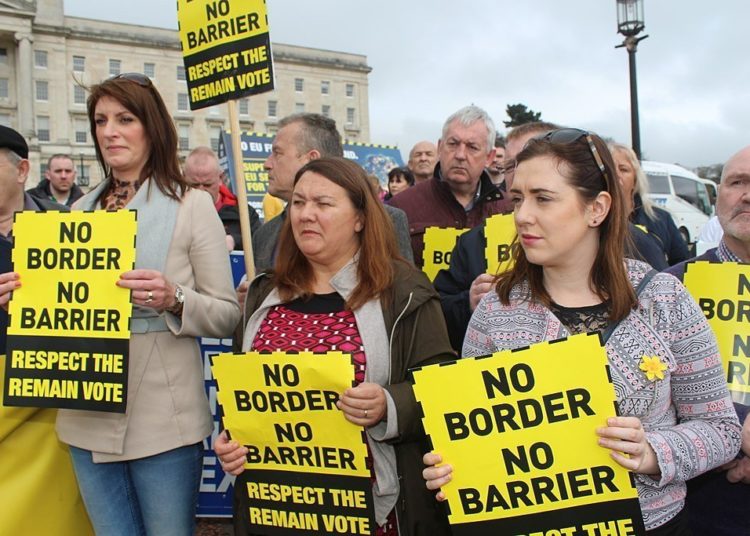 The House of Lords European Union committee yesterday released a blistering report into the government’s shambolic management of the Northern Ireland protocol, part of the Withdrawal Agreement agreed last October by Boris Johnson.

In the introduction peers condemn the handling of the implementation process with this claim:

“On the Government’s part, there was a series of seemingly contradictory statements, amounting to an inability to confirm and explain precisely what it agreed with the EU under the terms of the Protocol.”

It represents an amazing charge of incompetence. After taking evidence from a whole range of stakeholders as well as experts and ministers, many of the conclusions they reach are truly shocking and sometimes laughable, considering we are barely six months away from the protocol being applied.

During a visit to Belfast by the committee in February, witnesses spoke of their “deep frustration and dissatisfaction at the lack of engagement by the UK Government with the concerns of Northern Ireland businesses.”

Ministers are accused of not giving industry and commerce enough time to implement the “seismic change” to Northern Ireland’s trading arrangements and that it is now a “Herculean task” to complete the work that needs to be done by December this year.

Other articles on the Irish border issue:

While welcoming the government’s command paper published in May the reports regrets “that it took seven months for it to appear”.

Commenting on Michael Gove’s recent announcement about there being no new infrastructure required, the committee appeared to be puzzled and said it is “incumbent on the Government to explain how the new processes required under the Protocol can be undertaken, in the absence of new infrastructure.”

It asks the government to urgently detail how “regulatory checks could take place through market surveillance authorities at businesses premises and in the market on the basis of risk assessment, rather than at ports” as it has suggested.

The committee questioned Gove’s apparent proposal that “some checks
could be conducted during the sea crossing from Great Britain” and asks the government to clarify if the chancellor of the Duchy of Lancaster’s suggestion is still a live proposal.

Quoting from their own earlier report after a round table meeting with the Northern Ireland Business Network (NIBN) at Stormont in February, the peers point to the extra difficulties caused by the impact of Covid-19 on the NI economy and the capacity of individual businesses to cope. They and say, “Given its refusal to countenance an extension to the transition period, the Government must urgently explain to Northern Ireland stakeholders the practical steps that will be taken to ensure the Protocol is operational from 1 January 2021.”

From the same February report they quote their own words:

“It is a matter of simple equations. If there are new costs in terms of tariffs, paperwork or staff hours, and if costs exceed the product margin, then the product or business model becomes unviable.”

Suspicions in Brussels that the British government is seeking to water down what was agreed last year will not be helped by the committee drawing attention to subtle changes in the wording used by the command paper compared to the legal text of the protocol itself. The report accuses the government of an attempt to “reinterpret” things:

“Wereas the Protocol refers only to goods ‘at risk’, the Government’s Command Paper, in an apparent effort to reinterpret the Protocol, introduces references to goods at clear, genuine and substantial risk.”

The EU is also criticised for taking a hard line on the application of the rules with businesses warning that an “inflexible approach” could be economically disastrous.

The report notes the command paper provides some practical examples of activity that should be considered as internal UK but says the government’s explanation of how such “exemptions would work in practice is imprecise.” It points out that although the government has committed to providing full guidance before the end of the transition period, time is running out, and “businesses will need certainty well before 1 January 2021 if they are to make adequate preparations.”

Having had to admit there will be checks on goods going from GB to NI, Boris Johnson is still clinging to the idea there will be “unfettered access” to the GB market for businesses in the province, but this is now looking shaky as well.

NIBN told the committee that “the standard EU exit summary declaration form has 31 data elements (ie answers to questions) needed to be completed, and there was a €300 fine if the form was completed incorrectly.”

If the EU customs code applies to movements from Northern Ireland to Great Britain, there would be one form per consignment. They said that this could typically require 70 forms for a single lorry, and that completion of these forms would mostly be delegated to the logistics providers, who would be relying on the exporter for information.

This does not appear to be the unfettered access Johnson had in mind, indeed if he had anything in mind at all, when he accepted the Withdrawal Agreement.

The last round of trade talks before a decision is required on an extension to the transition began Monday by video conference with little hope of progress on the substantive issues and trust ebbing away on the side of the EU.