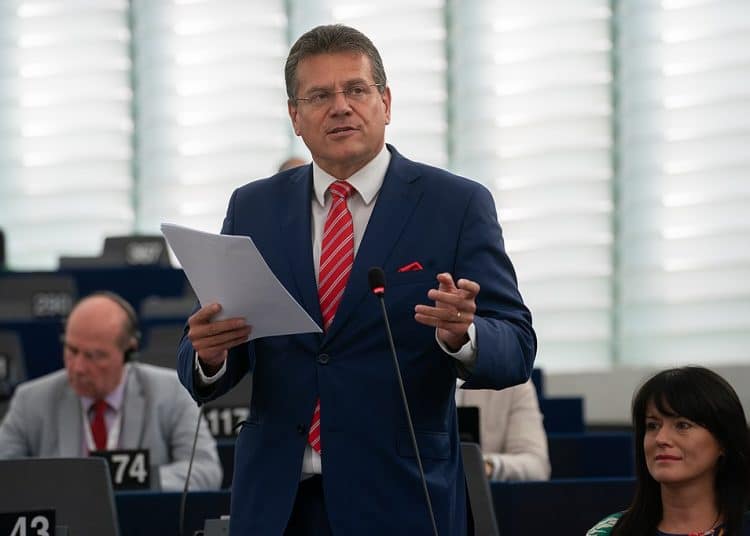 Maroš Šefčovič in European Parliament from EU, CC BY 2.0 , via Wikimedia Commons

There is a growing resignation in Brussels that the UK government intends to trigger article 16 of the Northern Ireland protocol as soon as COP26 in Glasgow is out of the way.

An Irish official has told Politico that a very bumpy few weeks is coming up, adding that “The UK government risks doing huge damage to UK-EU relations and Anglo-Irish relations”.

The FT also reports that the government is seeking to appoint new external legal advisers in an effort to give a fig leaf of cover for attorney general Suella Bravernman in support of Boris Johnson’s plans to dump part of the Northern Ireland protocol. This is increasing fears that ministers are seriously preparing to use article 16 and perhaps anticipating resistance from the House of Lords, who tend to be more squeamish about breaking international treaties.

Sir Jonathan Jones, the former head of the UK government’s legal department who resigned last year after the government admitted it planned to breach international law over the protocol, told the FT that the search for new advisers would not necessarily lead to better advice. “It’s a very bad sign if any client has to start shopping around for advice because they don’t like the advice they’re already consistently being given. It’s not the best way to produce authoritative, accurate legal advice”, he said.

Maroš Šefčovič, a vice president at the EU Commission overseeing the implementation of the protocol, is “increasingly concerned” that the UK government is embarking on a “path of confrontation”.

Writing in the pages of The Telegraph, he says not one of the business representatives he recently met in Northern Ireland asked for the protocol to be scrapped. Rather, they asked him to fix the practical challenges faced in implementing it which the EU has now done, going much further than many observers expected.

Šefčovič has called on the UK government to “engage with us and bring our talks over the finish line – giving Northern Ireland stability, predictability, and prosperity”.

His call appears to have fallen on deaf ears.

Last week Lord Frost, in a foreword to a new paper from the think tank Policy Exchange, wrote:

“The insistence of the EU on treating these arrangements [the NI protocol] as like any other part of its customs and single market rules, without regard to the huge political, economic, and identity sensitivities involved, has destroyed cross-community consent well before the four-year mark.”

He is skating on thin ice. According to the latest research by Queens University Belfast, support for the protocol in the province is rising, with 52 percent agreeing or strongly agreeing that it is a good thing against 41 percent disagreeing.

More importantly perhaps, faith in ministers has reached an all-time low in the province, with just 4 percent trusting or trusting a lot in the UK government. This compares with 45 percent having trust in the EU. The DUP and the Northern Ireland executive are at 14 and 13 percent respectively.

According to Mujtaba Rahman, managing director of the Eurasia Group and former EU and UK Treasury official with good links on both sides, the British government may be seriously under-pricing the EU response.

If Frost and Johnson go for the ‘nuclear option’, Brussels is preparing to go even bigger and more forcefully.

The UK government may find it has few friends on the international plane if it decides to move beyond the limited measures permitted under the treaty itself. It is already widely seen as duplicitous, unprincipled and not to be trusted.

The Americans are committed to the Good Friday Agreement and have swiftly moved to patch up differences with France over the AUKUS submarine deal. The EU and US announced at COP26 a deal to reduce methane emissions and have agreed to put an end to the trade war, cutting tariffs on EU steel exports to the USA and leaving UK steel producers high and dry.

Even the DUP’s former leader Edwin Poots has criticised the government’s trade deal with New Zealand, calling the removal of all tariffs from New Zealand’s exports of lamb, beef and butter to the UK a “very serious threat” to Northern Ireland farmers.

Frost is turning the clock back four years

Lord Frost endorses the Policy Exchange paper. It was written by Roderick Crawford, a former editor of the monthly British political magazine Parliamentary Brief, and simply rakes over the events leading up to the December 2017 Joint Report that Mrs May agreed and which formed the basis for future talks on the withdrawal agreement.

Crawford takes 100 interminable and minutely detailed pages to put the blame squarely on then prime minister Theresa May, for weakening her own negotiating hand and that of Johnson’s later administration in 2019.

But, while Crawford and Frost are clear about where the blame for the protocol should go (anywhere except those who negotiated it), they offer no new suggestions about what should replace it, and essentially return us to 2017–2018, when negotiators on both sides were thrashing around to find a way to solve the so-called Irish trilemma created by Brexit.

Johnson’s problem is that he has destroyed what goodwill and trust that might have existed and has now set us on a collision course with our former closest friends and allies. 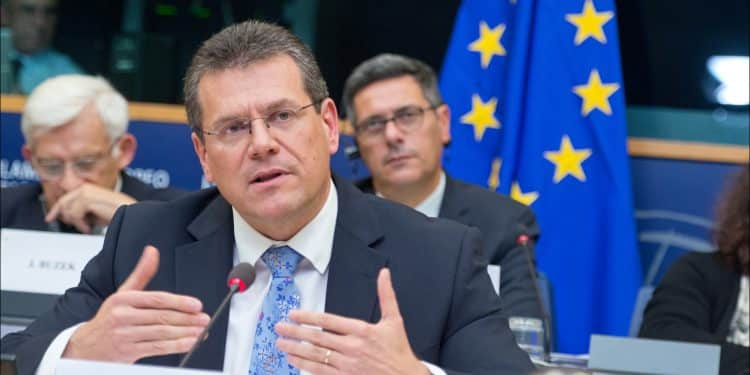 Crawford, for all his claimed expertise, is not quite correct to say it was “in the Joint Report that the core commitment was made that in order to avoid a hard border Northern Ireland would remain aligned with the necessary EU regulations to secure continued and future North-South cooperation, the all-island economy, and to protect the Good Friday Agreement”.

In fact, the joint report (paragraph 49) sets out three possibilities:

“The United Kingdom’s intention is to achieve these objectives [no hard border on the island of Ireland] through the overall EU-UK relationship [the 1st option]. Should this not be possible, the United Kingdom will propose specific solutions to address the unique circumstances of the island of Ireland [2nd option]. In the absence of agreed solutions, the United Kingdom will maintain full alignment with those rules of the Internal Market and the Customs Union which, now or in the future, support North-South cooperation, the all-island economy and the protection of the 1998 Agreement [3rd option]”

The final option was referred to as the backstop, in case the first two failed.

It was only because Johnson wanted a hard Brexit with the freedom to regulate differently and the UK government was never able to propose specific, practical and acceptable solutions to overcome the border issue, that the last resort option morphed into the Northern Ireland protocol, and became the front-stop.