The Food and Drink Federation is the latest to come up with a have-cake-and-eat-it plan, this time on rules of origin. 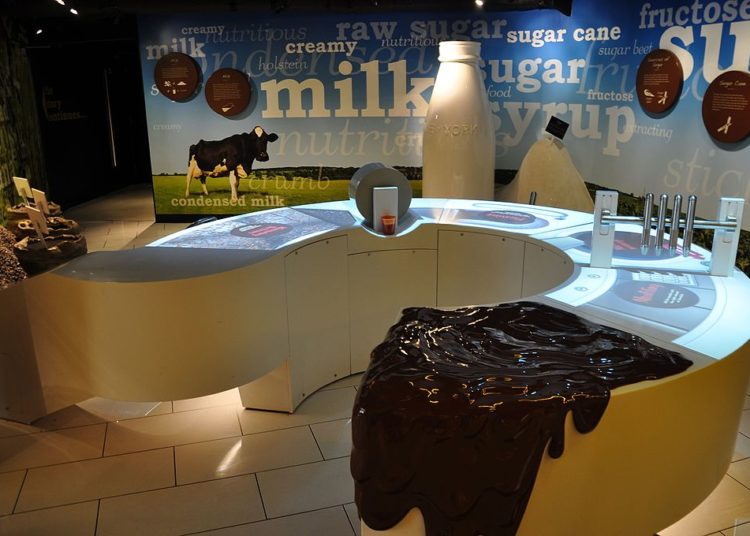 The Food and Drink Federation is the latest to come up with a have-cake-and-eat-it plan, this time on rules of origin. They want the EU to change things for this former member, in order to help maintain trade so that British and EU customers can enjoy the same choice and quality as before, as if nothing has happened. We can pretend all that nasty business about – what was it, Brexit or something? – has been forgotten.

Experts say it’s a good proposal, but bound to fail. It may also have serious consequences for Yorkshire’s chocolate industry depending on where they source their raw materials.

The Food and Drink Federation have written a joint letter from various UK and EU (mainly UK) food and drink trade associations to the EU and UK chief negotiators, Michel Barnier and David Frost, essentially asking for special treatment “to ensure highly integrated European supply chains can continue to operate.” This must have caused a bit of eye-rolling in Brussels.

It is a valiant attempt to protect the people who voted for Brexit from its consequences, but it seems doomed to fail.

For anyone who doesn’t know what rules of origin (RoO) are let me try and explain, but bear with me – I’m not an expert.

To enjoy tariff-free trade under a free trade agreement (FTA) the goods have to wholly originate in the territory of one of the two parties to the deal, or have a certain minimum local content. The amount of local content will vary according to the product and the FTA. This is to avoid one country sourcing stuff cheaply from other third countries and passing it off as their own to get an advantage.

During import, declarations of origin are attached to the documentation of any consignment seeking preferential tariff treatment and detailed evidence of origin may be demanded.

The EU has two methods of determining the origin of products – one, the Pan-Euro-Mediterranean (PEM) protocol is the most widely used and agreed between EU28, the European Free Trade Area (EFTA), Turkey and a number of states around the Mediterranean basin. The other is CETA – the Canadian FTA, which is almost the same as PEM but modified slightly to take account of Canada’s unique needs.

Apparently neither is any good for the UK after Brexit, according to the Food and Drink Federation.

Let me also say here the rules are mind-numbingly complex because the allowable local content amounts and the method of calculating them varies from product to product.

A report from 2018 sets out the problem

A 2018 report from the Food and Drink Federation gives an actual, if simple, example of a loaf of wholemeal bread. This loaf is made up of wholemeal flour (30 per cent), wheat flour (20 per cent) water (40 per cent) and yeast, salt, etc (10 per cent). The flour is milled in the UK either from locally grown wheat or wheat shipped from the US or Canada (tariff paid) depending on global price and harvest quality.

Once made it can be shipped anywhere in the EU – at the moment.

After Brexit under the PEM rules “the use of UK-milled flour from a blend of grains including any quantity of wheat grown outside the UK would automatically disqualify the bread loaf from preferential import tariff treatment into the EU single market.” [Our emphasis]

So that’s no good – our bakers can’t ship bread if the wheat is non-British.

What about CETA? This is no good either, because it only permits 20 per cent of non-British wheat and if you blend any Canadian or US wheat – as we must at some times of the year, if not most of the year – the loaf does not qualify.

The threat to York’s chocolate industry

The report gives another real example of a milk chocolate bar, which could have huge implications for York and its chocolate industry where similar problems arise with non-local content. Page 16 of the report explains that, “Neither the PEM nor a CETA-type origin framework’s sufficient transformation requirements are fully accommodative to supply chains using UK-refined sugarcane from non-EU originating brown sugar.”

And problems with a CETA-style system for dairy content means UK-made milk chocolate bars could fail to meet EU rules of origin requirements for avoiding tariffs of up to 35.4 per cent on imports of dairy products into the EU single market.

The same issues of origin determination would also be relevant when the bar was exported to markets outside Europe such as Canada under a future UK-Canada FTA that replicated the CETA arrangements. “Unless such an arrangement included diagonal cumulation provisions for the EU, a UK-made chocolate bar using EU content would risk failing to be eligible for preferential tariff treatment.”

Diagonal cumulation means assuming content from other countries with which we have agreed free trade deals is regarded as ‘local’ content.

So, the Food and Drink Federation are asking for various changes, including diagonal cumulation. Another one is calculating the percentage of local content by value not weight which the report coyly says is needed to reflect “the price premium they secure through higher quality, established brands and technological input in their products” – otherwise known as higher profits.

After December, without a trade deal, goods exported into the EU from the UK will be subject to the full range of EU tariffs. If we agree a deal some goods will go tariff free – but only provided they meet the criteria of wholly originating in the UK or having the right amount of local content.

Nestle warned last year about “major challenges” for the British food and drink industry and a spokesperson at the time said there was “real concern” at the company and across the sector over the consequences of Britain leaving without a deal. But the specific issue of rules of origin under a free trade agreement was not addressed.

What do the experts say?

Dr Anna Jerzewska of the UK Trade Policy Observatory and a consultant to the UN and the British Chambers of Commerce says on Twitter:

It’s been an interesting week for #rulesoforigin with the @Foodanddrinkfed and @nabim_flour proposal coming out.

Here is a longish ?on the proposal and on origin in general

She describes the Food and Drink Federation proposals as a “brilliant piece of work” and “well thought through”, adding that to say it’s ambitious is an understatement. It apparently makes what the UK has demanded so far look “basic” and is an attempt, she claims, to alleviate the impact on the food and drink sector of leaving the single market and the customs union.

But she goes on to question why the EU would ever agree to it.

It is the “embodiment of having your cake and eating it” she says, adding that Barnier was not happy about the UK’s much less ambitious original idea.

She cannot imagine the EU agreeing to the majority of the provisions so it appears to be a non-starter anyway.

What it does reveal is the complexity of Brexit and the minefield of international trade negotiations that Britain is ill-equipped to enter.