Is Lord Frost becoming a stain on England’s bright banners?

Lord Frost has barely settled into his new role before breaking an international treaty and unilaterally extending until October the 3-month grace period that the UK government declared in December last year was not renewable having committed itself to being fully ready by 1 April. 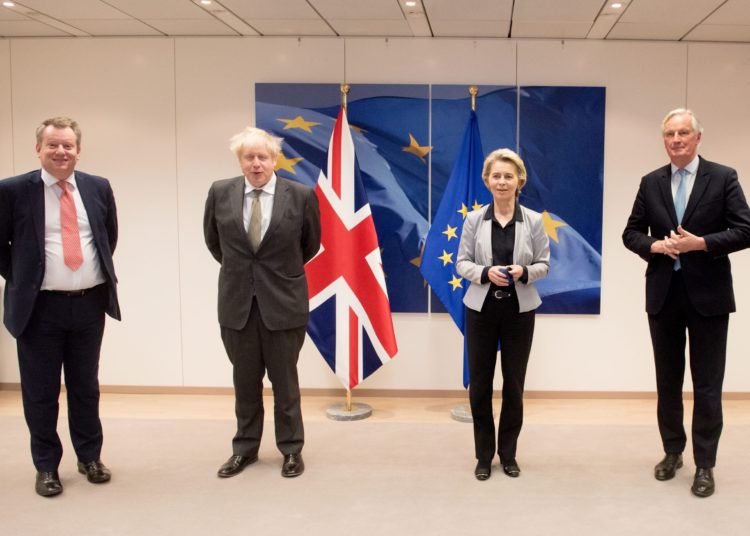 On 1 March, Lord Frost took over Michael Gove’s role as the minister leading the UK’s post-Brexit strategy, and chair of both the partnership council and the joint committee. Within hours he has broken the terms of the Northern Ireland protocol agreed at the end of 2019, to which both sides reaffirmed their commitment as recently as 24 February 2021.

Yesterday’s bombshell announcement came in a written statement issued by Northern Ireland minister Brandon Lewis, but appears to have Frost’s trademark heavy hand all over it. It seems deliberately designed to stoke tensions with the EU.

This contradicts the UK government’s own unilateral declaration of 17 December where it committed to having everything completed by 1 April and agreed the three month period of grace was “not renewable”. It has now declared that this grace period will not only be renewed, but extended as well.

Discussions to resolve difficulties experienced by traders and retailers in Northern Ireland were continuing, and there was a recognition by both sides that an extension was needed. The EU was expected to grant such an extension anyway, so it’s hard to see what has been achieved by this declaration, beyond the creation of mistrust and ill feeling.

The UK government, and Lord Frost in particular, seem determined to trash Britain’s reputation for fair dealing and being a reliable international partner.

The announcement was quickly followed by a condemnation from EU Vice President Maroš Šefčovič, expressing the EU’s “strong concerns over the UK’s unilateral action” which he says amounts to “a violation of the relevant substantive provisions of the Protocol on Ireland/Northern Ireland and the good faith obligation under the Withdrawal Agreement”.

Šefčovič pointed out it is the second time that the UK government is set to breach international law.

Mujtaba Rahman, managing director Europe at Eurasia Group and a former HM Treasury official who has also worked at the EU Commission, tweeted:

Irish foreign minister, Simon Coveney speaking on RTE, said the timing of the announcement could not be worse.

“That is why the EU is now looking at legal options and legal action which means a much more formalised and rigid negotiation process as opposed to a process of partnership where you try to solve the problems together”, he added.

In a further indication of bad faith, it has now been revealed that prime minister Boris Johnson had spoken the previous day to Irish Taoiseach Michael Martin about a joint Ireland and UK bid for the 2030 World Cup, but failed to mention he intended to breach the terms of the Northern Ireland Protocol 24 hours later.

We appear to be entering a new phase in EU-UK relations, where Britain is in a state of constant crisis with its European neighbours.

It comes as the EU parliament continues to scrutinise the trade and cooperation agreement, with a view to ratifying it by 30 April. This date was extended by agreement with the UK from 28 February. Since the trade agreement is in force provisionally, the UK parliament could have used the extra time to carry out a more detailed scrutiny itself, but has chosen not to.

Negotiations with the EU are also continuing on a memorandum of understanding with regard to obtaining access to the European single market for Britain’s £132bn a year financial services industry.

The EU is also considering a data adequacy agreement, to allow crucial cross-border data flows between Britain and the EU member states to continue after 30 June this year. Brussels, it seems, still has a lot of diplomatic cards to play short of legal action, and the path that the unelected Lord Frost has set the UK seems needlessly provocative. It is likely to result in more antagonism and less cooperation and to reinforce perceptions in some European capitals of the UK as the perfidious Albion of old.

The title of this article by the way, comes from the unattributed inscription on many of Britain’s War memorials:

Lord Frost might want to ask himself if they are indeed dreaming that they have died in vain.