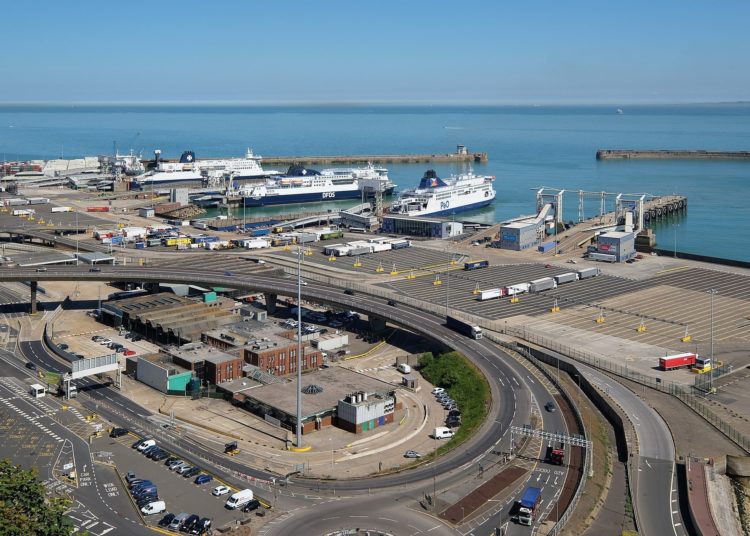 The long awaited border operating model was published yesterday to coincide with Michael Gove’s statement in the House of Commons. It sets out in gruesome detail how the import and export of goods to and from the EU will take place from 1 January 2021. At 206 pages it’s far longer that Labour’s 1983 manifesto (28 pages), but for the Tory party is set to replace it as the longest suicide note in history.

It is a mammoth piece of work, full of acronyms and jargon with a two-page glossary to help you follow the byzantine complexity of our future trading relationship.

Cabinet office minister Gove told MPs that the “comprehensive guidance” will “assist the smooth movement of goods” and help create “the world’s most effective border by 2025” between the UK and its largest trading partner. With a series of complex graphics, the guide explains the new bureaucratic hoops that both exporters and importer will have to jump through.

The one below is the “visualisation of the core stage 1 import process through border locations without an existing customs control system. This is likely to be for border locations which only handle goods from the EU.”

Different procedures apply to goods covered by international conventions or commitments, goods subject to sanitary and phytosanitary controls, goods with specific customs requirements and other goods like controlled drugs, drug precursors, medicines, veterinary medicines and so on. Each with a separate graphic.

At the weekend, Gove pre-announced a £705m plan to create maximum friction at EU facing borders. The new funding, described as an “investment”, includes up to £470m to build port and inland infrastructure, and £235m for IT systems and staffing. He called it a “new opportunity”. Stephen Dorrell disagreed:

The money for IT and staffing will cover £100m to develop HMRC systems to “reduce the burden on traders” who at present have no burden at all until January 2021 when the new rules – government imposed burdens – for exporting and importing come into force. In another piece of Orwellian newspeak, some £15m is set aside for new data infrastructure to “improve border flow and management”. At the moment there is no impediment at all so it can only have the opposite effect to ‘improving’ it.

Mr Gove said the funding would help the UK “seize the opportunities” post-Brexit, presumably in the same way that a pair of concrete overshoes would help Usain Bolt seize opportunities at the Olympic Games.

The entire model to avoid chaos in Dover on 1 January relies on a computer system that is still at the conceptual design stage. The goods vehicle movement service (GVMS) will authorise hauliers to arrive at Dover only if they have completed all the required paperwork. Gove was quite confident everything would be ready in time. He told the House:

“It is the case that the GVMS will be in place, as all the systems will, so that we can have a fully operational border, and of course the additional infrastructure – the £705m that we have announced today will ensure that it is in place in time – will be there specifically to ensure that when vehicles arrive in Calais they have passed through all the necessary checks and can then proceed smoothly to market.”

Leeds MP Hilary Benn asked about the 27 acre site just off junction 10a of the M20 south of Ashford, acquired last week by the government. He wanted to know if it was to be used “just to check that lorries leaving the UK have the right paperwork, so that they do not clog up the system at Dover and Calais, or will it be used for checks on goods coming into the UK in lorries – or both?”

‘Farage’s garage’, as the site has become known, will apparently be used to “ensure that lorries move out of the UK to the EU with our high-quality goods.” It seems therefore it will be a lorry park for trucks without the correct paperwork – at least that’s what it sounds like to me.

Complicated though it already is, there is apparently another computer system not yet developed or even mentioned in the guidance. This will be an entirely new web-based system with an app for mobile phones, separate to the GVMS, designed to track international lorries and prevent them entering Kent without permission, backed up by fines. This is according to Duncan Buchanan, policy director at the Road Haulage Association. He tweeted:

Yes.
There is another system planned. Web based with an app. Any international lorry that enters Kent without permission to proceed will be subject to fines.@HMRCgovuk & @transportgovuk are working on the details. Does not link with GVMS, totally separate. https://t.co/yMaUwNV2c0

As Gove, the current chancellor of the Duchy of Lancaster, was addressing the House of Commons yesterday, I wonder if he reflected on the fact that it was a former occupant of the same office and a Tory peer, Lord Arthur Cockfield, who was largely responsible for creating the single market from which we are now withdrawing.

Thirty five years ago, during another disappointingly cool summer in 1985, as EEC trade commissioner for internal market, tax law and customs, Cockfield published a white paper: Completing the single market. It is well worth a read as we prepare to leave it.

At 95 pages, it’s less than half the length of the guidance published yesterday but it had entirely the opposite effect. Whereas Cockfield’s 1985 white paper sets out to slowly remove more than 300 barriers to trade over the following six years, Gove’s creates more barriers that will be erected overnight in just six months’ time.

Looking at the detail I noted that one of the old barriers to trade that Cockfield proposed to abolish all those years ago was the duty payable on the “fuel contained in the fuel tanks of commercial motor vehicles”. An eye opener into a world most of us never knew existed but to which we are about to return, although one hopes it won’t extend to checking fuel tanks. But who knows?