At the heart of all this are the sensitivities around the border between Northern Ireland and Ireland and the need to protect the hard fought, and still fragile, peace process. 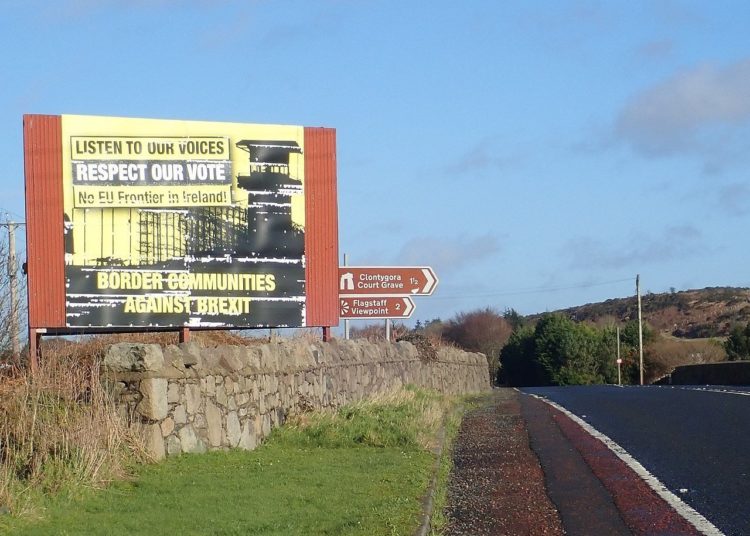 Alarm bells rang yesterday when Northern Ireland Secretary of State Brandon Lewis confirmed that the government intended to break international law – in a specific and limited way – with changes to the Withdrawal Agreement Act. Incredibly, the health secretary, Matt Hancock, surpassed this today with his claim that the proposed changes were in fact to protect the Northern Ireland peace process.

Talking this morning to Mishal Husain on BBC Radio 4’s Today programme Hancock said, “The decision that we have made is to put the peace process first and foremost as our top international obligation”. But if peace is at risk, responded Husain, the government should have thought that through before signing the deal.

In fact, Prime Minister Johnson should have thought about that last October when he signed the Northern Ireland protocol, which is part of the withdrawal agreement. Or perhaps he may wish to reflect on what he said last October when the deal was published: “The deal is in perfect conformity with the Good Friday agreement, and it is open to the people of Northern Ireland to vary the arrangements that I have described if they so choose.”

At the heart of all this are the sensitivities around the border between Northern Ireland and Ireland and the need to protect the hard fought, and still fragile, peace process. A return to a hard border with checks and patrols is something that everyone has been keen to avoid.

More articles from Yorkshire Bylines to read and share:

As ever coming to the party late, the government now realises the protocol fundamentally challenges legislation they introduced today – the internal market bill. This bill sets out the UK government’s plans to ensure trade between all four home nations remains barrier-free and to create common rules that apply across the whole of the UK. Northern Ireland suddenly becomes an anomaly, as under the protocol it has to apply some EU rules to allow goods to move freely into the Republic.

In the vague hope that no one would notice, the government decided that the best course of action would simply be to change the protocol that they had negotiated and agreed to just ten months ago. This is either brave or stupid, or possibly both, as this is an international treaty and, as the Financial Times put it, is “setting up UK law in opposition with obligations under the withdrawal agreement, and in full cognisance that this will breach international law” [our emphasis].

So controversial is the move, that yesterday Jonathan Jones, head of the government’s legal department, resigned abruptly amidst claims he had clashed with the attorney general, Suella Braverman, over this. He is the sixth senior civil servant to quit under Johnson’s premiership.

In a sign of just how bad things are, many were agreeing with Theresa May yesterday when she asked how the government can reassure future international partners that the UK can be trusted to abide by any of the agreements it signs. The long-term damage to Britain’s international reputation could be substantial, and would leave us unable to criticise any other country for not meeting their international obligations.

The irony of the government admitting it was breaking the law on the day it was urging people to follow coronavirus rules has not been lost.

Reaction to this from across the world has been quick. The New York Times reported that Congressional Democrats, as well as the Democratic presidential nominee, are likely to view any changes in Britain’s treatment of Northern Ireland as jeopardising the Good Friday agreement. This tweet from Anthony Blinken Joe Biden’s foreign policy adviser, makes Biden’s position clear:

This is nothing new. Last year Speaker of the House of Representatives Nancy Pelosi said, “Let me be clear: if the Brexit deal undermines the Good Friday Accords, there will be no U.S.-U.K. trade agreement.”

Johnson is following a high-risk strategy with a presidential election looming and Biden ahead in the polls. Good luck with that trade deal.

It’s also somewhat strange that the government has chosen to pick a very public fight, when it could instead have quietly applied Article 16 of the protocol. This says:

“The United Kingdom may unilaterally take appropriate safeguard measures if the application of this Protocol leads to serious economic, societal or environmental difficulties that are liable to persist, or to diversion of trade.”

With such a clear get out clause already in place, speculation is rife that the government is either losing the plot or wanting to distract from something – most likely its poor handling of the pandemic – with some headline-grabbing tactics (a tried and tested trick from the Cummings playbook). But it does make you wonder how many battles the prime minister can handle, and on how many fronts.

The UK internal market bill has already been provoking outcry from the devolved administrations who, according to the Financial Times, believe that “the UK government plans to sacrifice the future of the union by stealing powers from the devolved administrations”. To add to this growing list of concerns, there is some speculation that this autumn’s finance bill will contain a clause to rewrite a yet another aspect of the Northern Ireland protocol, this time covering the payment of tariffs on goods entering the region.

Civil society organisations in Northern Ireland have warned against the peace process and the rights of Northern Irish people being used as a bargaining chip in the latest round of UK/EU negotiations. Theirs is a powerful voice, having played a crucial part in upholding the peace process. Brian Gormally, director of the Committee on the Administration of Justice, called the secretary of state’s statement “shocking”, and highlighted how a binding international treaty now seemed to be “at the whim of government ministers” and could be “ripped up as part of a negotiating tactic”.

Meanwhile, Paddy Kelly, director of the Children’s Law Centre in Northern Ireland expressed her “deep concerns” about the UK government’s latest move and said its actions, “threaten the peace process of all children and young people in Northern Ireland”.

Kevin Hanratty, director of the Human Rights Consortium in Northern Ireland, emphasised that the protocol sits “at the heart of protecting the Belfast/Good Friday agreement and the principle of non-diminution of rights as the UK exits the EU”. He called for international law and the legal commitments already in place to be “respected and upheld.” Summing the situation up neatly he said:

“The protocol was at the heart of protecting the Belfast/Good Friday agreement and the principle of non-diminution of rights as the UK exits the EU. If the UK government is already stating that they are prepared to renege on its commitments under this agreement, before the transition period has even ended, then it bodes poorly for the future of other elements of that agreement as we move forward.”

If we have a government that feels able to disregard international law, then we have a government that feels it is above the law. Trust has now gone out the window, along with any good faith in the actions of Johnson and his Cabinet. Increasingly their actions seem more like an episode of Only Fools and Horses. But while Del Boy Johnson may think everything is “cushty” and “lovely jubilee”, the rest of the world is just seeing this for the comedy sketch it is – and the British public are the butt of that joke.