This weekend the EU parliament officially published the report that was partly leaked to The Guardian recently. 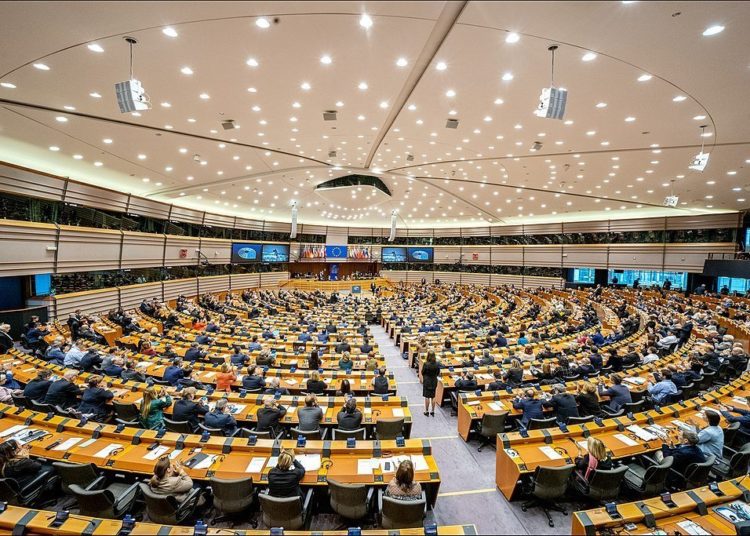 EU parliament marking the 30th anniversary of the fall of the Berlin wall European Parliament / CC BY (https://creativecommons.org/licenses/by/2.0)

This weekend the EU parliament officially published the report that was partly leaked to The Guardian recently. It backs Michel Barnier and the EU mandate to the hilt, increasing the pressure on Boris Johnson on the eve of his teleconference today with the three EU presidents.

The 137-page report has been drafted by MEPs and will be voted on by the 705 member parliament on Wednesday. It “regrets” the lack of progress so far, except what it calls “very small openings in a limited number of areas”. It expresses “deep concern” at the “limited scope of the future partnership envisaged by the UK Government and its piecemeal approach to negotiations only on areas that are in the interest of the UK.”

The key section comes early under ‘general principles’ on page 7 and says the EU parliament:

“Reiterates that the EU stands firm in its position that tangible progress must be achieved in all areas of negotiations in parallel, including on the level playing field, fisheries, internal security and governance, as outlined in the Political Declaration; emphasises that all negotiations are indivisible and the EU will not agree to a deal at any cost, in particular not to a free trade agreement (FTA) without having robust level playing field guarantees and a satisfactory agreement on fisheries; thus fully supports the Commission in defending the need for a comprehensive draft treaty as proposed by the EU at the outset, instead of agreeing to separate agreements as proposed by the UK.”

The report contains many references to ensuring there is no “race to the bottom” on standards and that the UK does not gain an “unfair economic advantage”, including for state aid where it calls for “dynamic alignment”.

On fisheries (page 71) it calls for continued access to British waters although it doesn’t spell this out in clear terms. It demonstrates that fishing rights are still a highly contentious topic and without a long-term agreement on fish there can be no free trade agreement. The report:

“Reaffirms that no comprehensive agreement, including on trade, can be concluded between the EU and the UK if it does not include a complete, balanced and long-term agreement on fisheries and fisheries-related matters, upholding the continuation under optimal conditions of access to waters, resources and markets of the parties concerned, as well as the existing fishing activities.” [our emphasis]

And on governance, where the UK government is looking for a series of separate free-standing agreements despite signing up to a single overarching framework, the report:

“Points out that the entire Agreement with the UK as a third country, including provisions on the level playing field, specific sectorial issues and thematic areas of cooperation and fisheries, should include the establishment of a single coherent and solid governance system as an overarching framework, covering the joint continuous supervision and management of the Agreement as well as transparent dispute settlement, compliance and enforcement mechanisms with sanctions and interim measures where necessary with respect to the interpretation and application of the Agreement’s provisions.” (page 34) [our emphasis]

The report and the scheduled high-level meeting with Johnson and the three presidents comes as the Irish Times claims sources close to the talks have indicated, “the shape of a deal on  ‘level playing field’ commitments on environmental, employment and consumer rights is visible. But Britain continues to resist the EU’s demand that it should continue to follow the same rules on state aid to industry.”

Chancellor Rishi Sunak also hinted at the weekend that progress has been made in the talks, as this tweet from the BBC’s economics correspondent, Faisal Islam shows:

It is not yet known what, if any, compromises have been made and by whom. The EU parliament report indicates that Barnier has little room for significant compromise.

Johnson has built up public expectations that we will be completely separated from the EU and all of its institutions while pushing to retain many of the benefits of membership. MEPs note that “contrary to the UK’s claims of using existing precedents” much of what we are asking for goes significantly beyond what the EU has negotiated with other third countries in recent years.

The prime minister knows that leaving without a trade deal in December would be immensely damaging to an already sick economy and he can ill-afford to threaten to do so. Note that all the rhetoric about walking away in June has disappeared.

Alyn Smith, SNP MP for Stirling, and a former MEP, tweeted a dig at the fact that the UK parliament does not have an equivalent report to vote on and, unlike the EU parliament, does not have the automatic right to approve any future trade deal. So much for the EU being undemocratic.

Despite what Michael Gove claimed in 2016, Britain does not hold all the cards and although we can expect more jingoism from cabinet ministers in the coming weeks and months, reality is slowly coming into view. The moment of truth is nearly upon us. We will soon find out what Brexit means. Will it be a new and glorious chapter in our history – or a national humiliation?

Over to you Boris Alexander de Pfeffel Johnson.