Peter Foster, public policy editor at the Financial Times has been to Dover to find out how prepared they are for leaving the single market and the customs union at the end of the year. 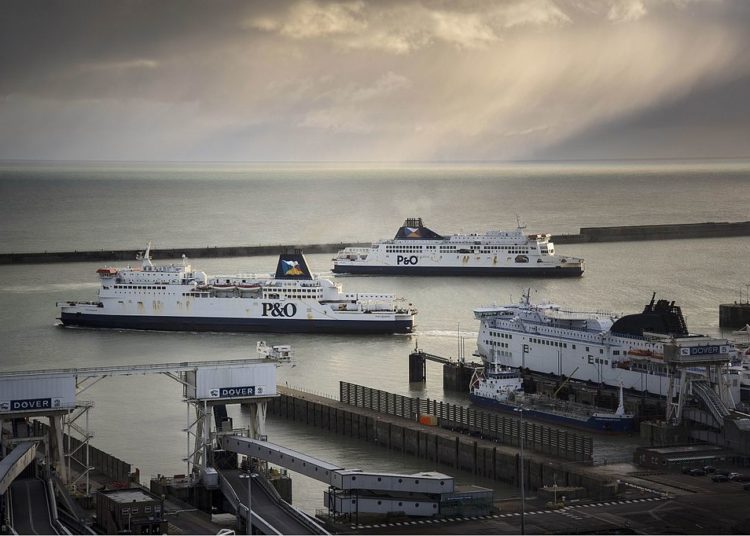 Peter Foster, public policy editor at the Financial Times has been to Dover to find out how prepared they are for leaving the single market and the customs union at the end of the year. His article is “Dover-Calais post-Brexit trade plagued by uncertainty.”

The government apparently promised to publish a plan in March, entitled ‘border operating model’, which was supposed to explain how our borders are to be controlled after 31 December. According to the FT, it was delayed and then promised for April, then May. It is now expected later this month.

Foster tweeted a link to his article:

What emerges is a picture of the management of our most important trading artery paralysed by uncertainty and having no information from government on what to plan for. All they know is that huge changes are coming and they have a little more than six months to get ready.

The key points are that firstly, there is zero chance of building any customs facilities at Dover. “Between the vertical chalk cliffs and the granite harbour wall there is simply no space to build new facilities. Even today the port has fewer than 10 lorry bays for customs checks.” writes Foster.

The same problem arises at Folkestone, where Eurotunnel handles 1.5m trucks a year. John Keefe, the director of public affairs at Getlink, the tunnel’s owner says, “We just have no space.”

Tim Reardon the head of EU Exit for Dover Port says the new system, whatever it is, will involve a “huge step-change” in the way Dover operates.

At the moment, freight from non-EU countries arrives in Dover “unaccompanied”. In other words, it comes in crates or containers that can sit in docks and airport warehouses until cleared for shipping to the importer.

He explains that Dover is not a depot but a “gateway” through which Ro-Ro (Roll on-Roll off) HGVs pass, up to 10,000 per day. The same processes that apply to unaccompanied boxes can’t be applied to trucks, as they can’t be parked for days while the contents are checked for contraband, VAT fraud or illegal products.

Currently, just four minutes after exiting the ferry, a truck can be out of the port and on its way.

Facilities will therefore need to be constructed elsewhere. The two potential sites “under discussion” are a truck park in Ashford and an existing customs park at the Stop 24 Folkestone services. These are 15–20 miles up the M20 motorway from Dover. There is also the suggestion that other customs centres are built around the country to avoid potential traffic bottlenecks on the south coast, in what some have described as a smugglers charter.

However, there is no sign of a planning application going in as far as Yorkshire Bylines is aware.

The French have already developed a system that works onboard the ferries as they cross the Channel. Declarations are filed beforehand and are read by barcode to identify each individual truck and load. Screens onboard show which trucks can drive straight-off the ferry in Calais (green) and which trucks will need to go for checks (orange). This is apparently already up and running and the freight companies are pressing the UK to buy a licence to run the same system on traffic in the other direction – but the government has refused.

John Keefe told Foster the big issue is really one of business preparedness:

“The sudden change in administrative burden from ‘you don’t have to do anything’ today to ‘you may have to do everything’ is huge. There is a great deal of uncertainty and little time to sort it out.”

Richard Burnett of the RHA has written to Penny Mordaunt at the Foreign Office asking for the transition to be delayed but was told no – businesses have to prepare. The problem is they don’t know what for and the government cannot or will not tell them.

Note also this Twitter thread from Michael M – a former logistics/freight forwarder explaining that the warnings of food shortages in January are not scaremongering but entirely possible, and certain if we leave without a trade deal.

Michael talks about the complexity of customs forms and declarations and how even if we manage to recruit and train 50,000 form-fillers in time (a very big IF) they will be inexperienced. He points to the 20 per cent error rate in customs documentation on the long-standing EU-Swiss border. What hope is there, he asks, for a smooth transition?

Coupled with that, the UK is moving from the old CHIEF (customs handling of import and export freight) computer system, to a new one called CDS (customs declaration service) in 2021.

Finally, Michael points out the UK has deliberately opted out of being part of the same safety and security zone as the EU and EFTA and hence each consignment will need a separate declaration to be made by the carrier as well as the customs declaration by the consignor. This apparently amounts to tens or hundreds of additional forms per load on the 10,000 loads crossing the channel daily.

Two more tweets and threads are worth reading. Firstly the Road Haulage Association warns of a 400 per cent increase in customs transactions from 1 Jan and 50,000 more customs agents needed. Richard Burnett says “time’s running out…”

And this one from Laurie Driver who claims the industry is 50,000 drivers short, a situation which at the moment is masked because we supplement our HGV workforce with drivers from the EU.

He says the unsociable hours and low pay aren’t attractive and after Brexit this is set to become a big issue. It isn’t just fruit pickers that we will be short of, we can add HGV drivers to that list.

This is a mess four years in the making.

As we approach the beginning of the fifth year after the referendum one begins to hear the sound of pennies dropping in Kent and perhaps even Westminster. Who knows, they may soon be heard in Downing Street.