Dominic Cummings has acquired a reputation as something of an intellectual super-being, Unfortunately, looks can be very deceptive. 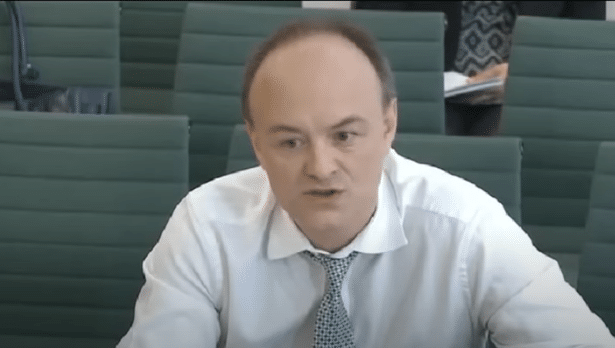 Dominic Cummings in front of a parliamentary Committee in April 2016

Dominic Cummings has acquired a reputation as something of an intellectual super-being, his oversized forehead seeming to be growing through his thinning hair and giving him the appearance of possessing a brain so huge it’s trying to burst out of its bony shell.

Unfortunately, looks can be very deceptive.

The great ‘forecaster’ was recently caught out altering his own blog post from March 2019 to make it appear he had foreseen the pandemic earlier than anyone else.  This is the kind of forecasting we can all be good at.

His real track record however is less than stellar. What success he has had is in devising simple three word slogans and pumping them out across social media. Compared to government, it’s not that difficult.

The truth is, if there is a single person who we can blame for the mess we find ourselves in at the moment, and here I am thinking of both Brexit and our response to coronavirus, look no further than the ‘genius’ Dominic McKenzie Cummings.

To understand why, we must go back nearly five years to this blog post of 23 June 2015 where the man who was to become the campaign director for Vote Leave decided we didn’t need a plan for Brexit because to get one “that makes sense and which all reasonable people could unite around seems an almost insuperable task”.

Even if you thought having plan was a good idea he said, “the sheer complexity of leaving would involve endless questions of detail that cannot be answered in such a plan” and anyway few MPs know the difference between the EEA and EFTA or WTO rules and the idea the public might be “educated about such things” seemed to him unlikely.

His ‘masterstroke’ then was to embark on what is the most complex constitutional change in history without a plan. The great advantage for Vote Leave was that everybody could argue for everything. Brexit became all things to all men, and women.

This only became a problem on 24 June 2016 when his side unexpectedly ‘won’ and it has been downhill ever since as people began to ask those endless questions that Cummings was so anxious to avoid before the vote. The plan that “reasonable people could unite around” has proved remarkably elusive.

In this context, it’s also informative to look at Boris Johnson’s recent admission that our response to the coronavirus pandemic has been poor partly because we didn’t learn the lessons of the past. He told Jeremy Hunt at a meeting of the Liaison Committee:

“I think the brutal reality, Jeremy, is that this country did not learn the lessons of SARS or MERS. And we didn’t have a test operation ready to go on the scale that we needed. We now have that”.

I wonder what might have so distracted the government of this country over the last few years that it was unprepared for coronavirus? Could it have been the huge amount of civil service time occupied in trying to find a way through the minefield laid by Cummings on Brexit? If only we had had a plan.

This is not even to mention Cummings’ involvement in devising the failed policies for controlling the virus anyway.

Other article by same authors:

In Ireland we are only now finding out the cost of solving the border problem that was barely mentioned during the referendum. Critical of Theresa May and the way she was going about delivering Brexit, Cummings penned an open letter in May 2018 to Tory MPs in which he said:

“Further, the Government promised in the December agreement to do a number of things that are logically, legally and practically incompatible including leaving the Single Market and Customs Union, avoiding ‘friction’ and changing nothing around the Irish border (as defined by the EU), and having no border in the Irish Sea.”

It was perhaps a fleeting recognition of the conundrum the genius left others to resolve.

Cummings argued for checks at the land border and claimed the “choice of not really leaving the EU (‘the Government’s backstop’) or undermining the UK’s constitutional integrity (‘the EU’s backstop’)” was a false one. No, it wasn’t false at all and now the government is undermining the UK’s constitutional integrity with a border down the Irish Sea. You didn’t need to be a super-forecaster, many people including Tony Blair and John Major warned him explicitly what would happen.

Just one more example, although heaven knows there are plenty of others. In July 2017 when it was announced that Britain would withdraw from Euratom he launched a furious attack on Twitter (now deleted but covered by the Independent), calling the then government “morons” and “near-retarded” for adopting the policy towards the EU’s nuclear regulator that he thought we could stay in. But David Davis told the House of Commons in January:

This proved to be right and we left Euratom formally in January this year. But in February we published our approach to the future relationship which in paragraph 20 has this:

“The UK will consider a relationship in line with non-EU Member State participation with the following programmes: Horizon Europe, Euratom Research and Training, and Copernicus. The UK will consider service access agreements for the following programmes: EU Space Surveillance and Tracking, and the European Geostationary Navigation Overlay Service.”

I love the “will consider” as if we are wandering around a cherry orchard and the EU are inviting us to choose whatever takes our fancy. We are now essentially attempting to get back into Euratom: “The UK and European Atomic Energy Community (Euratom) should conclude a Nuclear Cooperation Agreement (NCA) for cooperation on civil nuclear matters” is what we are proposing.

This is what happens when you let such a ‘genius’ loose on something so complicated. And don’t forget, Brexit is just the starter, he is on record in a now deleted tweet (but see it here) saying that Brexit alone, while necessary, was not sufficient. This is what he said on 3 July 2017:

“What will determine [whether leaving the EU was a success] is whether we can reform Whitehall / science / education / real productivity etc. Brexit nec, obv not sufficient” (sic)

For Brexit to work, there has to be wholesale reform of Whitehall, British education, science and productivity. Obviously. Really? Who in Brussels was stopping us doing any of this anyway?

Unless the ‘genius’ can be stopped it is just the beginning.