British exceptionalism, and the overriding need to do things differently, is once again being put to the test in Northern Ireland. 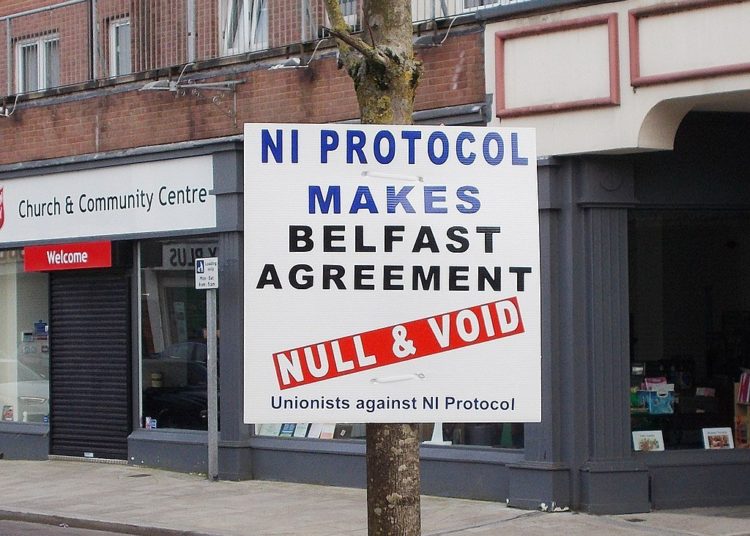 Talks are continuing between the UK government and the EU to resolve problems surrounding the implementation of the Northern Ireland protocol, part of the 2019 withdrawal agreement negotiated by Boris Johnson and including border checks which he now describes as “ludicrous”.

A statement issued last week by EU vice president for interinstitutional relations, Maroš Šefčovič, after an informal meeting in Brussels with Lord Frost, talked of “intense efforts” taking place and of a “constructive, solution-driven atmosphere”. Politicians and diplomats are under pressure to reach an accommodation after recent violent demonstrations erupted in some of Ulster’s loyalist communities.

Although the disturbances have stopped following the death of Prince Philip, the risk of another flare up remains and the marching season is not far away.

The two sides are still far apart on a lot of issues, but many experts believe that reducing the level and frequency of checks on products of animal and plant origin and live animals (the so-called sanitary and phytosanitary or SPS checks) at points of entry would go a long way towards defusing tensions.

An SPS agreement similar to the one the EU has with Switzerland for example, requires the Swiss to adopt a lot of EU legislation in the area of food production and supply as a way of eliminating the need for certification or checks.

Attempts to reach such an agreement during the trade talks last year foundered on Brussels’ insistence that the UK, like Switzerland, sign up to greater regulatory alignment with EU rules.

The UK government is therefore seeking the same outcome in reduced SPS checks, by using a mechanism other than the obvious and proven one that it doesn’t want to commit to for reasons of sovereignty, but which the Swiss are perfectly happy with. British exceptionalism, and the overriding need to do things differently, is once again being put to the test.

An ‘equivalence’ model, based on the EU-New Zealand veterinary agreement, which the UK government prefers, is not on offer. The EU claims it’s not appropriate since EU-NZ trade is only a fraction of that with the UK and while such an agreement would reduce trade friction, it wouldn’t eliminate it altogether.

The UK’s position is purely ideological since ministers have repeatedly pledged not to compromise on existing “environmental protection, animal welfare and food standards” in any future trade deals.

However, some Brexiters, including Lord Moylan, seem to believe non-alignment will benefit UK consumers. In reply to a suggestion that the British agri-food business will be “sacrificed” for other industries in a US trade deal, he tweeted: “This will be a great boon to consumers. Escaping the high food prices imposed by the CAP is a desirable goal.”

Yet a survey from 2018 showed that Britons spend less of their total household expenditure on food than any other country in the world apart from the US and Singapore. On average, we spend 8 percent, half of what the Greeks spend and a quarter of what an Indian family spend.

Food consumed in the UK is the cheapest in Western Europe – costing 8 percent less than the EU average, according to the EU’s statistical body Eurostat. In the last 60 years, most of it inside the EU, food costs in this country have more than halved according to the Office for National Statistics.

If this is indeed what’s preventing the government aligning with EU food regulations, it seems the UK is willing to sacrifice not only the British agri-food industry but also peace in Northern Ireland, in pursuit of a long-term and very small reduction in the cost of food, potentially at the expense of its quality.

In the short and medium term, Northern Ireland (and probably every family in the UK) will see food prices rise as a result of the burden of additional cross-border bureaucracy with the EU.

And now a similar situation is developing in the supply of generic drugs. Pharmaceutical companies producing non-branded drugs have started to withdraw them from the Northern Ireland market.

Under the Northern Ireland protocol, medicines made in Great Britain now need separate licensing for use in the region and are subjected to separate safety inspections and other checks before they can be released for sale.

The chief executive of the British Generic Manufacturers Association, Mark Samuels, says without an agreement some companies are considering withdrawing up to 90 percent of the medicines they currently supply. He told the Financial Times that generic drugs make up four out of every five medicines prescribed in the NHS, and access to many current medicines would be in “serious jeopardy”.