In terms of installations of industrial robots, Britain’s record is woeful compared to every other industrialised economy. 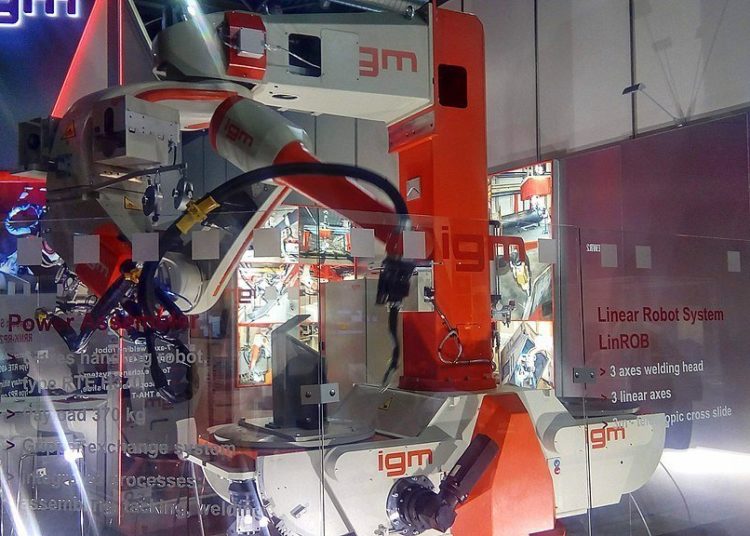 In terms of installations of industrial robots, Britain’s record is woeful compared to every other industrialised economy.

In 2012, a group of Tory MPs including Priti Patel, Dominic Raab, Liz Truss and Kwasi Kwarteng co-authored a book: Britannia Unchained, in which British workers were described as “among the worst idlers in the world”. Three of the MPs are now senior members of the cabinet.

They were right to draw attention to Britain’s chronic productivity problem but they identified the wrong culprit. It isn’t the British worker but the equipment or lack of it, particularly robots, which they have at their disposal. Britain has far fewer industrial robots for example than almost every other comparable nation.

Productivity, for those unfamiliar with the concept, is the measure of output per unit of input: it is fundamental to national prosperity.

An article in the Financial Times from August 2018: Britain’s productivity crisis in eight charts is a good primer in trying to explain the problem.

Britain lags the average productivity of the G7 nations by about 15 per cent. The average French worker is almost a third more productive than their British counterpart and a German even further ahead. These are highly significant differences.

The annual productivity increase in manufacturing from 1999 to 2007 was 5 per cent a year. This dropped to just 0.5 per cent between 2008 and 2015 after the financial crisis. Other sectors suffered in similar fashion. A respected think-tank, The Resolution Foundation said, “Had the pre-crisis growth trend continued, then productivity would be more than 25 per cent higher today”. In other words we would be 25 per cent wealthier as a nation, equivalent to an extra £500 billion a year.

For the answer to the productivity conundrum, instead of pointing to British workers, Raab, Truss, Patel and Kwarteng would do well to look at some recent annual reports from the International Federation of Robotics (IFR), an organisation based in Germany, which records installations of industrial robots around the world on an annual basis. The federation has 59 members, not one of them British.

The reason for UK manufacturing’s poor productivity record is soon spotted. Germany for example regularly installs ten times as many workplace robots as the UK.

You can easily download annual reports from the IFR website. The 2016 document is particularly interesting because it picks out the UK for a special mention (my emphasis):

“Sales of industrial robots to the United Kingdom further decreased in 2015 to 1,645 units. Robot installations in all other Western European and Nordic countries as well as in the Czech Republic and in Poland were considerably up in 2015. Sales to Turkey continued to increase in 2015.”

And in a damning comparison, looking at the density of installations, the report compares us to various other manufacturing nations: South Korea has 411 robots for every 10,000 workers, followed by Japan with 213 robots, Germany with 170, Taiwan with 159, and Sweden with 154 units and then comes this:

“Most of the emerging robot markets have a robot density rate below 30. The United Kingdom also has a rather low rate in the general industry; only 33 robots are installed per 10,000 employees”.

That’s it. Britain, the cradle of the industrial revolution is reduced to being compared with an emerging market, usually a term associated with the third world. Ashamed? We should be.

According to the FT’s 2018 report, in 1960 Britain had the highest level of productivity in Europe, measured in GDP per hour worked: better than France, West Germany and Italy. UK productivity grew continuously during the next 50 years, but often at a slower pace than comparable countries, meaning that Britain fell behind during the 1960s to become the “sick man of Europe”.

Between 1980 and 2008, the UK made up a lot of the lost ground but since then improvements in productivity have virtually ground to a halt. According to a BBC report in April 2019 we are barely more productive now than we were ten years ago.

Howard Archer, chief economic adviser to the Ernst & Young Item Club which models the economy, said: “The UK’s ‘productivity puzzle’ is a source of much debate and analysis”.

“Part of the UK’s recent poor labour productivity performance has undoubtedly been that low wage growth has increased the attractiveness of employment for companies. This helped employment to hold up well during the 2008–09 downturn and to pick up as growth returned,” he added.

The IFR figures show that between 2012 and 2020 Germany’s industrial robot base grew by 188,000 units while Britain managed just over 20,000, an imbalance that will take years to put right, even if we started tomorrow.

The productivity puzzle would be solved if companies invested far more in automation. They must do so urgently if our post-Brexit industrial future is not to result in an ever-rising bill for imported goods that we can and should be making for ourselves.

The first step in resolving any problem is to recognise you’ve got one and to identify what it is. What is clear is that the problem isn’t British workers and it isn’t EU regulations: witness France, Germany and Italy. It’s the lack of investment in productivity-boosting automation.

But there is no sign that members of the current government have understood or recognised the problem at all. They would rather heap the blame on the workers.