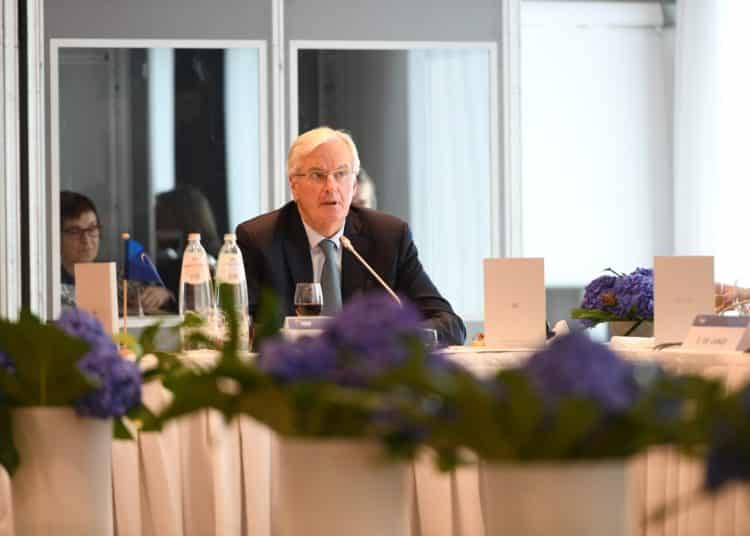 Despite five years of near-constant debate about Brexit, many of its leading advocates still fundamentally misunderstand the way the European Union actually works. One of these is Matthew Lynn, a financial journalist writing for various Brexit-supporting newspapers and magazines. His latest effort for The Spectator (chairman Andrew Neil) is a prime example.

He suggests Michel Barnier, who recently announced himself as a candidate in next year’s French presidential election, would be a disaster for Britain because his “hard-line stance meant both sides ended up with a far worse deal than was necessary and an atmosphere of mutual mistrust and suspicion that will take years, if not decades, to repair”.

The implication is that Barnier conducted the negotiations on behalf of himself and in doing so, caused untold economic damage to both Britain and his employer, the European Union. Lynn seems to assume that Barnier wielded massive dictatorial power over supine member states.

In fact, Barnier negotiated the trade deal according to a detailed mandate drawn up by the member states. They dictated to him what he could and could not do, exactly as they did with the withdrawal agreement negotiation.

There were times, particularly when negotiations became tense and threatened to reach stalemate, that Barnier wanted to offer Britain concessions but was prevented from doing so, notably by the French president, Emmanuel Macron.

That the final deal was so close to the EU’s initial mandate is testament to Barnier’s skill in maintaining unity between the EU27, and the unequal nature of the trading relationship.

It is also telling that there appears to be an absence of debate in EU capitals about renegotiating this ‘damaging’ deal. Barnier has, if anything, enhanced his own reputation in European circles.

Tom Hayes is executive director of BEERG (Brussels European Employee Relations Group), a labour relations consultancy and no stranger to hard negotiating. He responded to Lynn’s piece on Twitter:

How Barnier delivered a ‘master class’ in negotiations

Hayes has also written an excellent paper that describes the EU chief negotiator’s handing of the Brexit process as a ‘master class’ in the negotiating process. It stems from Barnier’s book La Grande Illusion (out now in hardback).

Solid foundations were laid immediately after the referendum. The EU consulted widely and defined its objectives clearly. It put together an experienced team that was always on top of the details, and built a firm consensus.

By being transparent and keeping the EU27 ambassadors and governments informed at all times there were never any surprises.

Meanwhile, Theresa May struggled to get the 20 members of her cabinet to agree, and the whole process was shrouded in secrecy from start to finish. There were never any clear objectives and now we have nothing but nasty shocks.

The key difference between the two sides was that the EU27 based their mandate on limiting the damage. They were realistic in the way that Brexiters were not, and managed expectations. Britain was unable to leverage any of the delusions that held the Brexit coalition together.

The sunlit uplands have vanished like a mirage and having failed to see the entirely predictable consequences of Brexit, enthusiastic supporters like Lynn now seek to shift the blame onto others.

Theresa May and the ‘scrutiny reserve’

However, Hayes and Barnier are not alone in knowing how to conduct successful negotiations. Mrs May also knew how to approach talks with a body like the European Union although when it came to actually doing it she didn’t apply her own advice.

When May was shadow leader of the commons, she co-authored a pamphlet together with her adviser Nick Timothy (who now writes for The Telegraph after he was forced out following the 2017 election disaster), about the UK’s ‘democratic deficit’. This was in 2007, during the run up to the signing of the Lisbon treaty.

The pamphlet was published by Politeia and it hails Denmark as an example of how a government’s negotiators could be made accountable to parliament.

“Denmark, for example, obliges ministers to obtain a mandate for negotiation from the Danish Parliament’s European Affairs Committee.”

The pair explained how Danish ministers must, by law, appear before the European affairs committee of the Folketing (the Danish parliament) to obtain a mandate for negotiation on anything directly applicable in Denmark, or where implementation requires parliament’s support.

May and Timothy called for an equivalent British ‘scrutiny reserve’ to be put on a statutory basis. This would mean that, “ministers are required to come before the European Scrutiny Committee before negotiations at the European Council. It would therefore be impossible to override it. Ministers should have to set out their negotiating positions to the Committee, and gain its approval”.

Perversely, in 2016, the two of them, acting entirely alone, went on to make the momentous decision to leave the single market and the customs union.

There was no consultation with colleagues, parliament, or stakeholders in industry, no cabinet discussion, no scrutiny committee approval, no mandate and no consensus.

Virtually all our present difficulties can be traced back to this decision.

Strange how filling a democratic deficit that seemed so attractive in opposition becomes less so in government isn’t it?

Lynn is no superforecaster himself

Lynn is a financial columnist and author. He writes for the Wall Street Journal’s Marketwatch, The Spectator and Money Week as well as The Telegraph, The Sunday Times and Bloomberg.

He is fortunate to make a living out of giving his opinion on lofty economic matters, though he does not seem well suited to offering such advice.

In August 2016, he predicted that within a year “growth in the UK will be far ahead of the rest of Europe, and even our exports to the rest of the continent will be up”. He cautioned about an unsustainable demand-led boom. In fact, we sank to the bottom of the G7 growth league. In the last five years, the UK economy on average has shrunk by 1 percent a year. The Eurozone enjoyed a small amount of growth.

In December 2018, as the first potential no-deal exit loomed, he asserted that any difficulties Remainers claimed would happen were simply myths. The ports would stay open, the “trucks will still roll through them” medicines would “keep flowing” and the City would have a good year. He also said “fruit will still be picked, and the factories will keep running.”

It won’t go unnoticed that the present disruption to food production and supply chains, largely down to Brexit, have happened after we negotiated a deal. They are a gentle headwind compared to the hurricane that would have engulfed us under no-deal conditions.

He suggested “with regulatory divergence the UK will steadily pull ahead of rivals such as France and Germany” and match the USA by being “more innovative, attract more capital, and our companies will seize markets more quickly, than they otherwise would have done”.

Nearly nine months later, and after years of internal wrangling and endless red-tape initiatives, we still have no idea in what way UK regulations will diverge from the EU. The much-vaunted UKCA certification to replace the familiar CE mark has now been deferred for another year due to a lack of British certifying bodies.

But never mind, it must all be down to Barnier’s hardline stance.