Today marks 23 years since they signed the Good Friday Agreement, 100 days of Brexit, and 8 nights of street fighting in Northern Ireland. 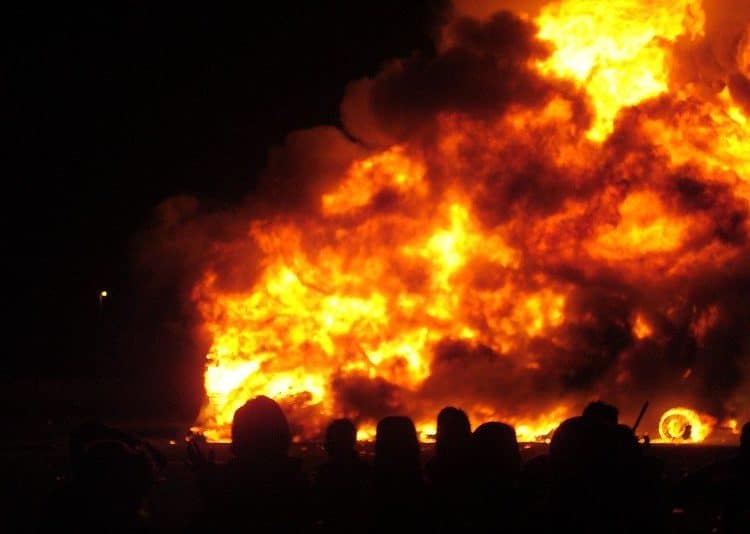 "East Belfast bonfire" by Alan in Belfast is licensed under CC BY-NC-ND 2.0 (NB. Photo was not taken during the recent unrest)

Bertolt Brecht, “He who laughs has not heard the latest news”

Twenty-three years after they signed the Good Friday Agreement of 10 April 1998, and just a hundred days after the bad deal they call Brexit, there came eight nights of street fighting in Northern Ireland.

Many had predicted riots. Those of us who can remember the dangerous winter of 1969 had been dreading the end of what they arrogantly called the transition period.

Brexit and the impact on the Good Friday Agreement

My years of reporting the agonies of Belfast and Derry began in September 1969 when the Daily Mail sent me to work in the streets of Northern Ireland. The Protestant backlash against the British Army’s August intervention to protect the Catholic enclaves was at its worst when the London office asked me to assist their chief feature writer Vincent Mulchrone for a day.

Vincent and I drove through East Belfast and Sandy Row wearing matching white overalls in an old Austin pickup truck, passing for a pair of plasterers. Over his customary lunchtime half-bottle of champagne, in a pub called the Red Barn, the great feature writer revealed that, like me, he had been born in the grand-sounding Yorkshire maternity hospital at Morley, known as Morley Hall.

Peace lines built to divide the Protestants and Catholics

On the day they started building the first ‘peace line’ to separate Protestants from Catholics, a British Army officer told me his Belfast wall would be higher than the one in Berlin that divided East from West. A night editor in Manchester cut the officer’s words from my story. It was quite unbelievable.

The peace walls are still there. When a German friend of mine saw one of them under attack this week on television news, he emailed me from Cologne: “Bombs between the Catholics and the Protestants, is that the news? What did the last 26 years teach them?”

Doctor Bernhard Müller of Frechen asked the wrong question. What have the last 26 years taught the British politicians? Do they have the courage and realism that their predecessors found on Good Friday 1998 to reverse Brexit as soon as possible?

Why are they rioting in Northern Ireland?

They are rioting partly, and perhaps mainly, because their prime minister told lies about Brexit to politicians in the DUP who have dog-whistled the spirit of resistance among the parents of the rioters. Johnson promised that there would be no hard border in the Irish Sea, and no trade barriers between Northern Ireland and Great Britain. Everything he promised would not happen, has happened.

Boris Johnson told lies upon lies, until on Christmas Eve 2020 he agreed a deal with Ursula von der Leyen. This deal is now tearing down the Good Friday Agreement, the single most important British diplomatic achievement since Harold Macmillan’s Wind of Change speech in Cape Town, where he indicated that the British government had no intention of blocking independence of its colonies

The Good Friday Agreement of 1998 made peace in Ireland possible after 110 years of Troubles that followed the defeat of Gladstone’s 1886 Government of Ireland Bill by 30 votes at Westminster.

William Gladstone’s three-hour speech narrowly failed to achieve home rule. He beseeched parliament to pass the bill and grant home rule to Ireland in honour, rather than being compelled to do so one day in humiliation. Gladstone warned that in many parts of Ireland, “distress was chronic, disaffection was perpetual, and insurrection was smouldering”.

The disaster of Brexit now threatens the Good Friday Agreement

The lies told by Johnson, to hide the fact that the Brexiters have sold the Unionists down the river, will never be forgiven. In particular, they will not be forgiven by the children of some of the most resolute, unforgiving, and implacable people in all of the British Isles: the Ulster Protestants. There are more than three quarters of a million of them.

Winston Churchill in the House of Commons in 1922:

“Then came the Great War. Every institution, almost, in the, world was strained. Great empires have been overturned. The whole map of Europe has been changed. The position of countries has been violently altered.

“The modes of thought of men, the whole outlook on affairs, the grouping of parties, all have encountered violent and tremendous changes in the deluge of the world, but as the deluge subsides and the waters fall short we see the dreary steeples of Fermanagh and Tyrone emerging once again.

“The integrity of their quarrel is one of the few institutions that has been unaltered in the cataclysm which has swept the world. That says a lot for the persistency with which Irish men on the one side or the other are able to pursue their controversies.

“It says a great deal for the power which Ireland has, both Nationalist and Orange, to lay their hands upon the vital strings of British life and politics, and to hold, dominate, and convulse, year after year, generation after generation, the politics of this powerful country.”