It didn’t used to be like this: buying tickets online to travel from Leeds to Amsterdam via Brussels by train with just a passport and euros. 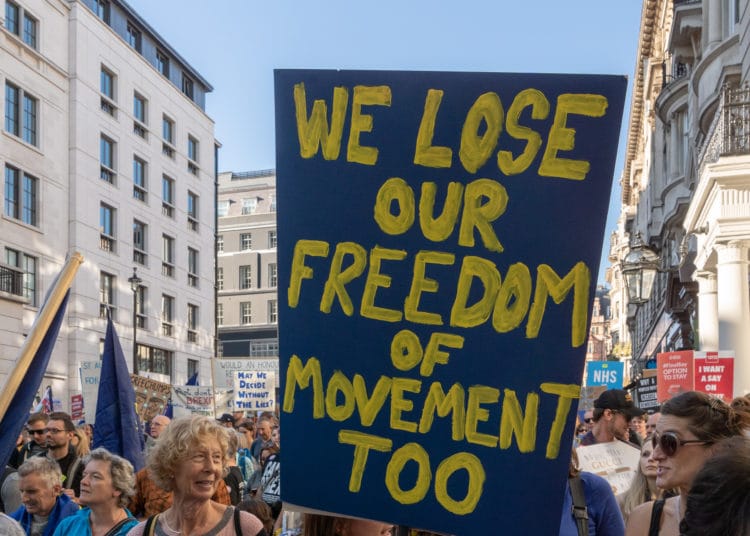 It didn’t used to be like this: buying tickets online to travel from Leeds to Amsterdam via Brussels by train with just a passport and euros. Back in the day, we needed travel agents to source tickets well in advance, book Channel or North Sea ferries, point us to the ticket counters in the different countries to buy onward travel tickets where we’d change trains, and make sure we had sterling, francs and guilders. Getting airline tickets meant planning and picking them up. It was a bit of a mission and that’s even before we got to passport and customs controls.

So June 1985 was special. The Schengen Agreement was born when some EU leaders decided to make travel between their countries as easy as possible for the public as well as for business; as easy as hopping on a train to go from St Andrews to London, and a lot cheaper too. This was before the Single Market got off the ground in January 1993.

Schengen developed into what we have taken for granted for 35 years. Travelling across any of 31 countries of Europe when the fancy took us. It took over 15 years before we had a common currency – the euro – but eventually we got there. Not having to traipse off to the bank to pick up pre-ordered currencies was a relief. Driving across Europe got easier too, with no hard borders and a common pink driving licence, recognised by all the states as a valid driving permit, which meant there was no need for an additional, temporary international driving licence. How quickly chip and pin plastic cards issued in one country came to be accepted across the EU. It wasn’t always like this.

June 2020 is special too. It’s Schengen’s 35th birthday. It is being celebrated this week in Europe for what it has allowed us to do together. To travel, work, live and love in any EU state had not been as easy for ordinary people before Schengen. Even the concept of EU citizenship was still a twinkle in the eyes of some politicians. The same was true of the EU’s Fundamental Rights Agency, Eurojust, Europol, Frontex and the EU Charter of Fundamental Rights. The Erasmus student exchange programme was in its infancy, but today it is open to people of any age.

Even though the UK was never fully a member of Schengen, we did much to create a borderless Europe. Strange that the UK is now kicking off because it won’t be able freely to access the various databases that were set up to manage visas, combat terrorism and international organised crime, and track lost and stolen passports, trafficked people, body parts and goods. Even Mrs Thatcher saw the value in that, while grandstanding on sovereignty. Pragmatism and the opportunities of open borders trumped sovereignty for her. The UK led on shaping and making the Single Market and driving a strategy of removing obstacles to free-flowing goods, services, people and money. Working together worked; imperfectly, but it worked.

Opening the borders helped transform our world. Anyone under 34 years old hasn’t known life in a Europe full of borders, regulations, controls and bureaucratic hoops at every turn. So Schengen is a celebration of freedom to roam for everyone. But Brexit means we’re out of Europe. We think we’ve taken back the sovereignty that we’d never lost in the first place. In fact, we’ve now handed to every EU country the power to use border checks on all Brits travelling to Europe. Before Brexit, we could do so when and where we wanted to without border controls. We could enjoy the hard-won freedom to use our phones and data on holiday without being hit with massive bills. Outside the EU, we can’t.

As Europe celebrates Schengen, it recognises that this is about more than the convenience of borderless travel. The ability to appreciate being part of something bigger than a single nation state and think European is genuinely valued. But critics today highlight how much more there is to do to create a tangible capacity to address public health and environmental needs in a coordinated basis. The sometimes ad hoc responses to Covid underlined the immediate need to work together in areas like disease control.

With an eye on better coordination to combat a second Covid wave, Europe is carefully lifting its internal Covid borders, as it seeks to make it possible for citizens to enjoy the EU geographic area freely again. The UK government is doing the opposite. It has not only made staying in the UK incredibly cumbersome and unpleasant for many of our EU friends working here, but now it is pretending that the EU is to blame for not letting us have the freedoms EU citizens continue to enjoy. Returning to what it used to be like is a hell of a journey back to somewhere we were pleased to leave. It is a journey to a dark destination.