The EU is about to become our biggest competitor, make no mistake. 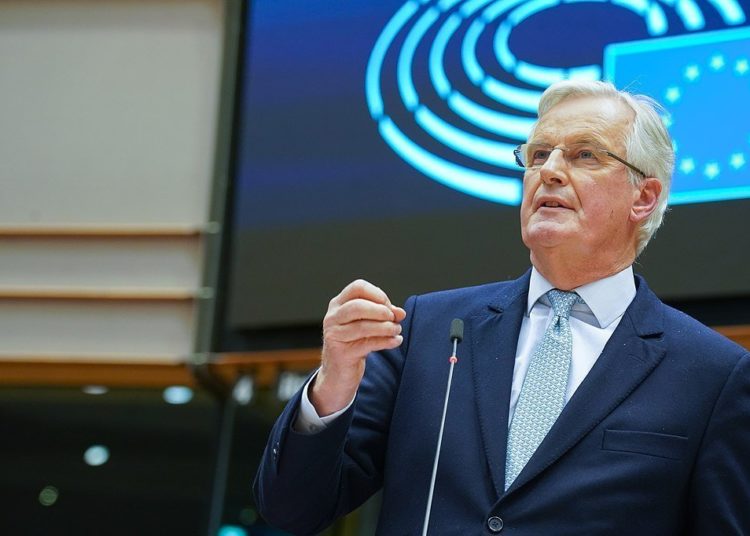 Michel Barnier at the EU parliament in January watching members vote on the EU-UK Withdrawal Agreement European Parliament from EU / CC BY (https://creativecommons.org/licenses/by/2.0)

Michel Barnier gave a speech to the European Economic and Social Committee (EESC) plenary session yesterday, reported in typically hysterical and erroneous fashion by the Daily Express as Michel Barnier CAVES: EU now ready to offer ‘compromise’ after UK threats of no deal.

In fact he did nothing of the sort. If anything it was quite the opposite. He rejected any idea that the EU might change its mandate. The speech was delivered partly in French but you can read the whole thing in English HERE.

The EU’s chief negotiator said his objective is to find an agreement, “but not at any cost” and he went on to make the EU stance very clear. The UK had built a strong position in the EU in a number of strategic areas, he said. This included not just financial services, business and legal services, but also as a regulation and certification hub and a major entry point into the EU single market.

“As it prepares to leave the single market and the customs union, we must ask ourselves whether it is really in the EU interest for the UK to retain such a prominent position.” And he asked some pointed if rhetorical questions:

“Do we really want to consolidate the UK’s position as a certification hub for the EU, knowing that it already controls some 15–20 per cent of the EU certification market?

“Do we really want to take a risk with rules of origin that would allow  the UK to become a manufacturing hub for the EU, by allowing it to assemble materials and goods sourced all over the world, and export them to the single market as British goods: tariff and quota-free?

“Do we really want the UK to remain a centre for commercial litigation for the EU, when we could attract these services here?”

“When considering our options, we need to look beyond the short-term adaptation costs, to our long-term economic interests,” he said.

Brexiters hoping to create a Singapore-on-Thames, as a low-regulation gateway into the single market will be disappointed. And tellingly, Barnier asked why the EU would want to see the UK as a centre for commercial litigation “when we could attract these services here”.

If anyone thought that Brexit would see Britain competing with a lethargic EU, or that Brussels would simply accept the UK as a permanent offshore competitor but not respond to it, Barnier’s comments yesterday should dispel that idea. The EU intends to attract as much new business and enterprise as it can. Brussels will not look like the Aunt Sally that we have been used to, but a serious threat to the United Kingdom.

We are now in deadly serious competition with the EU27.

Barnier lists the benefits he says we are seeking to retain including almost complete freedom of movement for short-term stays for UK service providers, a system for the mutual recognition of professional qualifications, and having our customs rules and procedures recognised as equivalent to the EU.

We also want to co-decide with the EU on decisions relating to the withdrawal of equivalences for financial services.

In fact, he says we are demanding a lot more than Canada, Japan or any of the EU’s other free trade agreement (FTA) partners but once again he confirms, “We cannot allow, and we will not allow, this cherry-picking.”

Setting out some of “mechanical consequences” that flow from the UK’s decision to leave the single market and the customs union he lists changes that will occur on 1 January whatever the outcome of the negotiation:

Businesses in the EU and in the UK, he adds, must prepare for these changes and no FTA, however ambitious, can change this.

Barnier said, the EU’s position is not “dogmatic or technocratic” it is simply that they will “never compromise on our European values or on our economic and trade interests, to the benefit of the British economy.”

And in a final swipe at the Brexiters, he commented that sometimes he hears people in the UK suggest that the EU is adopting unreasonable positions: “But they are only unreasonable for those who refuse to accept that Brexit has negative consequences for the UK.”

So hopes of progress now rest on the high-level political discussions between Boris Johnson and Ursula Von der Leyen and the other heads of state later this month.

Walking away would resolve nothing. By their own admission, Brexiters have always maintained that trade deals are good and sooner or later Britain will need to come to an arrangement with Brussels. In the meantime, Peter Foster at the FT, a long time Brussels correspondent, tweeted:

The jockeying starts. But it can’t hide fact that UK is still on the wrong side of the ticking clock. Refusing to extend gives UK less leverage, ultimately, not more because ‘no deal’ consequences fall asymmetrically on UK side. Same playbook from EU. Run down clock. Squeeze. https://t.co/1ZRCyTu8OL