Barnier sends uncompromising and blunt warning to London’s financial institutions - a stark ‘pack your bags’ message to start moving operations into a member state if firms want to continue to provide services inside the EU. 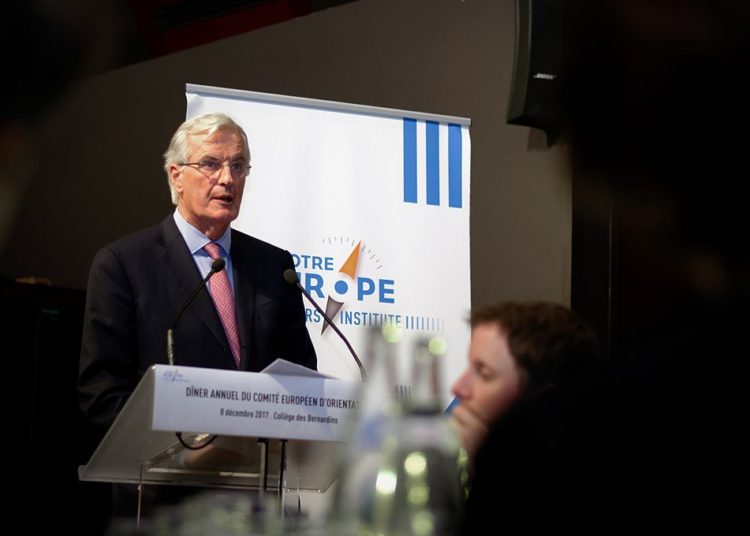 Barnier has sent an uncompromising and blunt warning to London’s financial institutions that the trade talks currently being held in Brussels are not going to offer a back-door into the single market and that they must prepare for the EU and the UK to become “two separate markets, two jurisdictions.”

It was a stark ‘pack your bags’ message and a warning to start moving operations into a member state if firms want to continue to provide services inside the EU. Coming on the day the deadline for an extension passed, it was also a sign that Brussels is taking the gloves off and applying more pressure on Boris Johnson.

Yesterday, in a video message to Eurofi – a financial think tank whose membership includes 70 European banks, asset managers and insurers including Barclays, HSBC, AWS, Morgan-Stanley, Goldman Sachs, Credit Suisse and many others – he told them that Britain is seeking to “create a legally enforceable regulatory cooperation framework on financial services”; but the EU has rejected the idea out of hand.

“There is no way Member States or the European Parliament would accept this,” Barnier said.

The EU has proposed a chapter on financial services, in line with other free trade agreements, but Barnier said the UK is “looking to go much further” and he added, “I will be blunt: its proposals are unacceptable.”

“The UK is trying to keep as many Single Market benefits as it can. It would like to make it easy to continue to run EU businesses from London, with minimal operations and staff on the continent.”

City financial institutions have been preparing for Brexit, acquiring licenses from EU regulators in Ireland, Germany, France and Italy in readiness, but have moved only small numbers of staff into what the EU calls “brass plate” operations.

Mario Draghi, head of the European Central Bank, warned in 2017  that risk had to be managed inside the EU. Phillip Inman at The Guardian said, “when the next crash comes, regulators need to call senior officials within their jurisdiction and not a clerk who occasionally polishes the sign on the door.”

At that time, the Bank of England expected to lose 75,000 jobs in the City, but the actual number relocating so far has been much less than feared, mainly because only junior customer-facing front office staff have moved. Barnier’s warning may be the start of a much larger exodus and of more senior officials.

Barnier told Eurofi that Britain wants almost free rein for service suppliers to “fly in and out for short term stays” and proposes “provisions on the performance of back-office functions that could create a significant risk of circumvention of financial services regulation.”

Britain also wants the EU to drop “residence requirements for senior managers and boards of directors, to ensure that all essential functions remain in London” but this has also been firmly rejected.

He said that the EU is prepared to carry the “short-term adaptation and fragmentation costs” in order to gain long-term benefits of building a capital markets union and strengthening the independence of the EU.

“And so, we will only grant equivalences in those areas where it is clearly in the interest of the EU; of our financial stability; our investors and our consumers.”

He asked rhetorically what this means in practice, with the following answer:

“It means that you need to get ready for 1 January 2021! We now know that the transition period will not be extended. The EU was open to an extension. But the UK refused. It is the UK’s choice. So, 1 January 2021 will bring big changes. UK firms will lose the benefit of the financial services passports. This should not come as a surprise to you. We have been warning about this for the past three years.

“Furthermore, as you know well, in some areas – such as insurance, commercial bank lending or deposit-taking – EU law does not provide for the possibility to award equivalences that would grant market access to third-country firms. In these areas, if British firms want to provide services in the EU, they must ask for an authorisation in the EU. Or comply with all the relevant national regimes of those EU Member States where they want to continue to be active.

“Nothing in the agreement that we are negotiating will change this! These are automatic, mechanical consequences of Brexit. If you are not yet ready for these broad changes that will take place – whatever happens – on 1 January 2021, I can only urge you to speed up preparations and take all necessary precautionary measures!”

Financial firms have had fingers poised over the ‘go’ button for months expecting that the trade talks would throw them a life-line, but yesterday put an end to any lingering hopes that the UK might get privileged access.