A cycling trio are taking on the mammoth national three peaks challenge in a bid to raise thousands for charity. 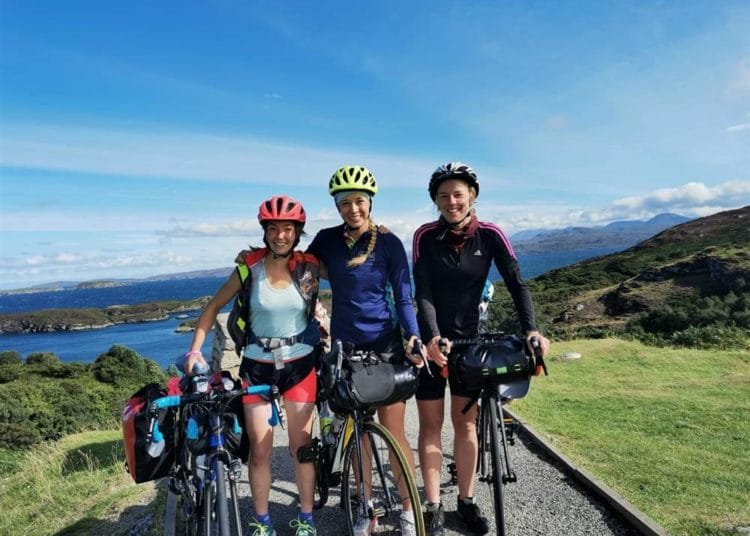 Emily Cowper-Coles, Saoirse Pottie and Cass Stuttard are taking on a mammoth walking and cycling challenge this week. In a bid to raise nearly £3,000 for charity, they will be completing the national three peaks challenge – a walking/climbing distance of 23 miles – and cycling the route between each mountain – an additional 462 miles.

The cycling trio are aiming to smash the current women’s record by completing the walking and cycling three peaks challenge within 72 hours – from 25 to 28 June. They hope to help raise awareness of women in cycling and at the same time raise money for the Trussell Trust and the Kinder Mountain Rescue Team.

Emily Cowper-Coles, 28, who works for the Yorkshire Wildlife Trust says:

“It is hopefully going to send a message to all women that they can go out and tackle anything. Whether it’s a tiny ride on a weekend or a bigger ride, we hope it will be inspiring for women to get out and go for it.”

What is the three peaks challenge?

The three peak challenge involves climbing the three highest peaks of Scotland, England and Wales. The trek will start from Snowdon, Wales then they will cycle to Scafell Pike, England and then on to Ben Nevis, Scotland climbing each of the mountains. Friends will be supporting them across the journey.

The challenge has been set for a Guinness world record attempt. The current women’s team record is 87 hours 59 minutes, but the three friends hope to tackle the challenge in an impressive 72 hours.

The purpose of the challenge

Charities are a lifeline for people across the UK. A recent report showed that 39 percent of charities experienced an increase in demand in 2020, due to more people turning to them for help and existing service-users needing more support during the pandemic. Charity fundraising events such as these are key to supporting those most vulnerable.

The charities chosen for this record-breaking challenge are the Trussell Trust, and the Kinder Mountain Rescue Team.

The Trussell Trust supports a vast network of 1,200 foodbank centres across the UK providing emergency support to people who need it most.

Since the start of the coronavirus outbreak, the charity has seen an increased demand for food, with a 61 percent rise in food parcels required. A record 2.5 million foodbank parcels have been given to people in crisis across the UK between 1 April 2020 and 31 March 2021.

The Kinder Mountain Rescue Team operates on a purely volunteer basis, offering assistance to the public 24 hours a day throughout the entire year. They team helps members of the public in urban search and rescue situations. The fundraising effort will help finance a new Land Rover Defender ambulance, which will be an essential part of saving lives in the Peak District.

Emily added, “We hope to raise money for two fantastic causes but we also hope we can be role models to other women and inspire them to take on similar challenges”.

So far, the women have raised over £2,000 and are just short of their target. To support them, visit their JustGiving page.

Events such as the three peaks challenge being undertaken by these friends, provide vital support to charities, so they can continue their essential work. The pandemic saw fundraising almost come to a halt as the virus took hold of the UK. Worryingly, 48 percent of charities believe the lack of fundraising will persist past lockdown. Now with the prospect of a third wave hitting the UK, these charity fundraisers will be needed more than ever.