Greg and Ails Mcgee share their experience running a gallery in York, with contemporary depictions of the city, and UK land and seascapes. 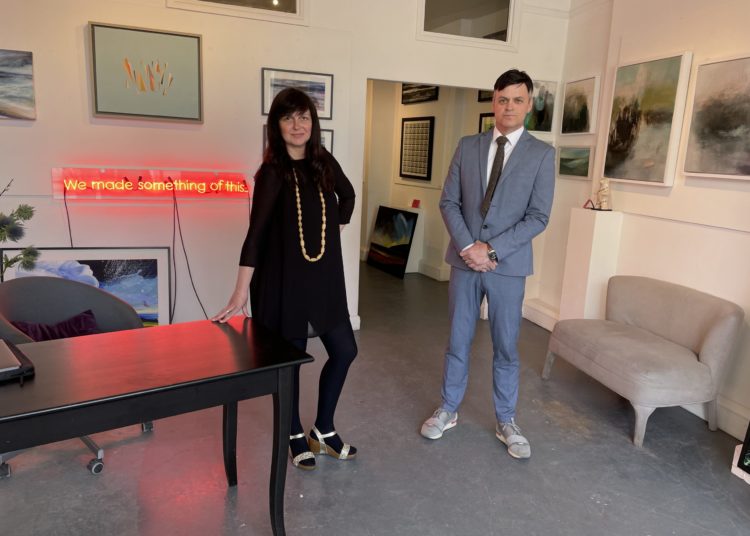 “We were told as students in the 1990s that painting as an art form was dead, bourgeois, patriarchal, and colonial. We’re very much here to prove that wrong.”

Greg and Ails McGee meet me outside the eponymous York art gallery they own and run, Greg in a slim-cut grey suit and trainers, Ails in a flowing black dress. They make a striking couple. The gallery itself, According to McGee, is similarly eye-catching, the acid-yellow paintwork of its frontage delightfully incongruous against the brickwork and sober greys of its neighbours.

Paintings in the window – a Georgie Britton seascape, a depiction of York Minster by local artist Richard Barnes, an angular abstract by Beth Ross – hint at the eclecticism inside. The gallery’s legend, Visual Art Regrooved, again in yellow on the main window, gives a little bit of attitude. As art galleries go, According to McGee is decidedly rock and roll.

Yet suggestions that the gallery’s image is an extension of its owners’ personalities is refuted. “There’s a lot of noise out there”, Greg says. “So to stand out we have to catch the attention of people who might otherwise buy paintings from other galleries. Our commitment to painting as the commercial art form of choice leads to our distinct personality as a gallery.”

Ails agrees. “We have a bright yellow facade and neon signs in the window, but all of that only goes so far. Without the quality of the paintings we exhibit we would have faded a long time ago.”

Inside the gallery, landscapes and seascapes accompany pop art in a way that might be deemed incongruous, but the McGees have curated an atmosphere that enables the two to sit comfortably alongside each other. I wonder how important their location is to their choice of who and what to exhibit. Greg suggests it’s more a matter of practicality than a strategic decision.

“Contemporary depictions of York seem to connect very well with our collectors, as do the seascapes of the north-east, but if they didn’t connect we wouldn’t exhibit them.

“Logistically, it’s easier for a local artist to drop off work at the gallery, but the idea of reducing our remit to simply celebrate our location is a backwards step. We thrive because we are a progressive gallery and look outwards in our celebration of the best painters in the UK.”

This celebration is good for artists, too. It helps them to develop as creatives, and in turn brings in its own financial rewards. “There are people whose art we would sell for a few hundred pounds that we now sell for three or four grand”, Ails says.

Greg and Ails met 20 years ago at Huntington school, in York, where Greg taught literature and Ails was acting head of art. They became engaged, in Paris, in 2005 (“Where we immediately bumped into Kylie on St Germain!” Greg tells me) and married in Kelso in 2006. Art, unsurprisingly, formed a strong bond between them.

“Whenever we went on holiday, whether it was to St Ives or Barcelona, we would always walk a mile or so off the tourist track to find the independent galleries”, Greg says. “On our return to York we’d always miss that side of city life as at that time, in 2004, there weren’t any independent galleries in York. It was Ails who said ‘Let’s open a gallery!’

Our biggest seller of 2018 was (pop artist and bassist from The Specials) Horace Panter who launched his ‘Beano is 80!’ exhibition, a collection of portraits of characters from The Beano. Last week we had a collector enquire about a painting from Karen Krieger, an artist who lives in Boston, USA. Our net is thrown wide.”

Horace Panter came to prominence as a painter through his vibrant, large scale Sony Walkmans and music cassettes, reviving early eighties memories of personal music-on-the-go. They carry an undeniable nostalgia, but also speak of how we consume music now, the shift in music from something definitive to potential ephemera. I ask Ails how she and Greg know Horace.

“Our gallery manager back in 2014 knew a friend of a friend and put the word out to Horace to see if he wanted to exhibit his new paintings in the North. Horace was instantly agreeable and is an absolute gentleman with some amazing stories from 40 years of touring the world.

“Even in the early days, he would avoid the hungover mornings and seek out the local art galleries after a gig, so we have that eccentricity in common. The Specials have enjoyed a resurgence and the sales of Horace’s work go up in time with the band’s tours and number one albums. His ‘Beano is 80!’ exhibition put us on the map for collectors from all over the UK.”

Their gallery’s history seems to echo this sense of sobriety within a sea of hedonism. “Private views used to be parties, basically”, Ails says. “But we started to see that people drank a lot of free wine and didn’t buy very much! These days they’re quieter affairs, perhaps a glass of bubbles in the afternoon.”

So who else, in an ideal world, would the McGees like to represent?

“We met the Kaiser Chiefs at an opening night”, Ails says. “Their work is great and allowed other artists to bounce back in response. Grayson Perry is a force of nature. We like art you can see from across the room and know who the artist is immediately. And we recently had a Jim Moir (Vic Reeves) painting that was donated by a private collector, but we’d love to represent him properly. He’s from Greg’s neck of the woods, in Middlesbrough.”

I wonder if this says anything about being part of a ‘northern art scene’. Greg isn’t sure that such definitions are helpful. “There’s definitely a northern art scene, and it’s exciting to be around, but we don’t necessarily attempt to be part of it. If we happen to reflect the scene around us it’s more symptomatic than a sophisticated attempt.”

Having said that, Greg and Ails both acknowledge that they would like to see more galleries along the same lines as theirs in North Yorkshire. “It would be good to be part of a scene in that respect”, Greg says.

Ails agrees. “People think we wouldn’t want the competition, but we’d love it if this street became full of little galleries!”

I wonder how the pandemic has affected According to McGee. “The early days of lockdown were so disturbing that we found ourselves choosing calming art that reflected the healing power of nature for our Instagram page”, Ails says. “Dark seascapes with a bright smudge of hope on the horizon not only made us as gallerists feel better but they led to a groundswell of support.

“The positive feedback led to me picking up the paintbrush for the first time in years. In no time I produced ‘Horizon’, a collection that developed into depictions of the Scottish Borders. The online sales went way beyond anything I’d hoped for.”

So lockdown enabled the artist in you to re-emerge? “Definitely. I discovered painting again and am now looking at establishing my own studio space within the gallery.”

So what’s next? I wonder how far in advance the McGees plan their shows.

“We’re allowing the collection we currently have to evolve and develop”, Greg says. “Years ago we ran a strict riff of six week solo and duo exhibitions, and that was a blast, but we would find it restricting now, as would our collectors. The stable of artists we have can all be celebrated under the umbrella ‘return of the painter’, an overriding concept that will inform our exhibitions for a while now.”

Although the gallery displays some sculpture, and the photography of Nick Howard (the owner of Castle Howard), I can understand how this ‘return of the painter’ motif gives the gallery a real identity that is immediately apparent when you walk through the door.

“We were told as students in the 1990s that painting as an art form was dead, bourgeois, patriarchal, and colonial”, Greg says. “We’re very much here to prove that wrong. Painting has never been so needed.”

So are Greg and Ails collectors as well as dealers and enthusiasts? Ails lights up at the idea.

“Yes, we love collecting. It’s an exciting and expensive hobby! The great thing about a good painting is that it brings you pleasure whenever you look at it and in a time where happiness has been thin on the ground, that’s a big deal. Everyone should have an original work of art in their home, whether it’s created by themselves, given as a gift, or bought in a gallery.”

According to McGee can be found opposite Clifford’s Tower at 8, Tower Street, York YO1 9SA. Open 12–4pm Saturdays, or by appointment.