A brief history of the coffee house including origins, rise in popularity, women's petition against coffee and the rise of tea over coffee 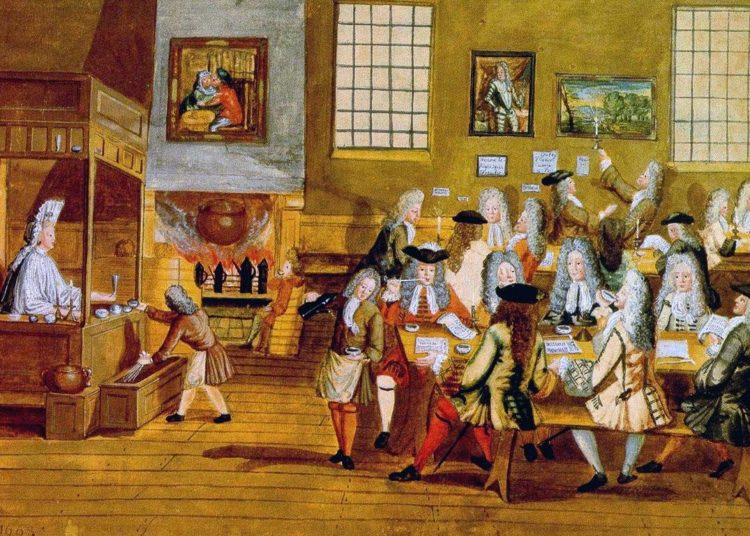 The opening of a coffee roasting business, Recent Beans, at Queen’s Mill several months ago made me think a little more about the beverage I drink far too much of, and in particular where we consume it. Here therefore, is a very concise history of the coffeehouse. Enjoy it with your morning espresso!

Origins of the coffeehouse

The late 17th and 18th centuries saw a new fashion sweep the nation: the coffee house. These were public and very social spaces where conversation and debate were the order of the day. They were also a place where business was conducted and deals concluded; an alternative to the usual places of business in the bustling cities and towns.

European travellers and traders to Turkey and the Middle East had been familiar with the drinking of coffee from at least the late 15th century, its introduction into Europe occurring due to its perceived, often very dubious, health benefits such as cures for ‘head-melancholy, gout, scurvy, smallpox and excessive drunkenness’.

The mid-17th century saw coffee’s appeal change from medicinal applications to a drink to be enjoyed. The first coffeehouse to open was at the Angel Coaching Inn in Oxford around 1650, quickly followed by several more. These early establishments in Oxford were known as penny universities, as they offered an alternative to the formal academic learning of the colleges themselves. They were though, the preserve of the well-educated and the wealthy.

Coffeehouses as a source of news, views and business

The coffeehouses soon spread to London and after a somewhat slow start, they quickly grew in number. By the end of the century, there were over 3,000 in the capital alone. The penny coffee was drunk to a background of political, philosophical, and scientific discussions and the ever-turning wheels of business. Indeed, Lloyds of London was founded by Edward Lloyd at his coffeehouse, which was frequented by sailors, merchants, and ship owners.

The sale of coffee was, like so many popular items, heavily taxed and brought in significant revenue. Even so, King Charles II attempted to ban coffeehouses, claiming that they were “places where the disaffected met, and spread scandalous reports concerning the conduct of his Majesty and his Ministers”.

The coffeehouses though, were a major source of news and views, with their owners providing a supply of newspapers and pamphlets. There is no doubt this was sometimes anti the monarchy. By 1702, London’s first true daily newspaper, the London Courant was operating. Between each publication runners were employed to visit the coffee houses to spread important news ‘flashes’ that could not wait for the next edition.

Women objected to the amount of time their husbands spent in such establishments. In 1674, the ‘Women’s petition against coffee’ was launched, stating in a pamphlet that coffee, “made men as unfruitful as the deserts whence that unhappy berry is said to be brought”. But whilst it’s true that many visitors to coffeehouses were male, in most women were not banned and they were frequently owned and run by women.

By the early 18th century, the coffeehouses were especially known for their “egalitarian and democratic character … where people from all walks of life came to sip from a bowl of coffee and chat with their neighbours, free from the social conventions of class and deference that were usually extended to social superiors in other settings”.

The coffeehouses also spread more widely geographically. At one time, York could also boast over 30 such establishments such as Farnhill’s on the corner of Ousegate, Harrison’s, first in Petergate and later on Nessgate corner, Iveson’s, in Petergate, and Duke’s, near the Ouse Bridge.

Coffeehouse premises were also often locations for clubs such as The Good Humour Club, which met at Sunton’s Coffeehouse on Coney Street, in York. “It celebrated the twin virtues of companionship and conviviality with its members comprising clergymen, doctors, masons, booksellers, mercers and drapers.” In 1724, coffee was so popular that permission was sought in York for a roasting house.

The decline of coffee and the rise of tea

By the end of the 18th century though, coffeehouses had almost completely disappeared from England, due in part to an increased demand for tea created when the British East India Company had a far greater interest in the tea trade than in coffee.

The government offered various inducements to increase the sale and consumption of the beverage. This, coupled with a much wider access to newspapers, theatres, concerts, and other entertainment, guaranteed that the heyday of the coffeehouse was well and truly over.