It’s all glamour at the Corner Café

The Corner Cafe was no ordinary café, but a place of ritzy glamour with a ballroom and stage for all kinds of live entertainment. Experience the 1920s with Grandma Abson's lemon pound cake recipe. 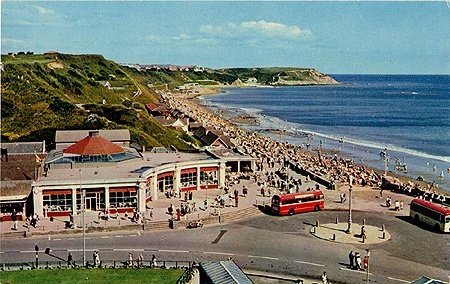 From the early 1900s, there had been a small shack selling refreshments at the corner near Peasholm Gap in Scarborough, but by the 1920s a brand-new development was planned. The Corner Cafe was opened on 5 June 1925 and according to the Scarborough Mercury it was reputed to be  “a grand and lofty affair”.

The mayor, mayoress, councillors and local dignitaries attended a civic ceremony and the building was opened with a golden key.

The Corner Café complex which cost approximately £15,000 to build (about £800,000 today) was built from reinforced concrete, with a front façade of artificial stone, bronze windows, leaded lights, ornamental trellis work designed to host resplendent floral displays, and a dome constructed of fibrous plaster in white and gold, 600 fairy lamps, a floor of terrazzo with a bold ornamental design and counters for the confectionery trade.

This was no ordinary café but a place of ritzy glamour with a ballroom and stage for all kinds of live entertainment.

The café for 100 diners and another 120 guests in the forecourt outside, had black, green, and bronze furniture, with enamelled cane and plate glass table tops. The crockery was emblazoned with Scarborough Borough’s coat of arms in blue.

Visitors to the café could enjoy their sumptuous afternoon tea while tapping their toes to the sounds of the orchestra.

A bit of baking history

Planners had integrated new ‘labour-saving’ kitchen devices and these were demonstrated during the inauguration, including machinery for dish-washing and for cutting and buttering bread electronically.

In the 1920s, commercial bakers could benefit from quicker and more reliable baking processes and were baking lighter and fluffier cakes with greater ease. It was during this period that baking became more creative for both professionals and amateurs alike.

Cakes and desserts were very much the vogue, moving on from the heavier Victorian puddings. Commercial bakers were also creating elaborate gateaux and elegant fashionably styled tartlets, which were a mouth-watering feast for the eyes.

Sponge cake however remained the epitome of indulgent decadence in the 1920s. This 1920s version of the traditional lemon pound cake was popular on the menus of all the best hotels and served with fruit and cream. The recipe included baking powder to lighten the density.

Sadly, by the 1990s the Corner Café was a shadow of its former self, and in 2007, the entire complex was demolished, to be replaced by a development of sea view flats and other local commerce.

But we can relive the glamour with recipes which were popular on menus of the era which we still enjoy today such as meringues, scones, and almond cake, and tap our toes to the 1920s jazz music of the era.

Acknowledgments and many thanks to those who compiled the creative arts project ‘Stories from Scarborough’ which has provided much of the details about the Corner Café.

Read more about Grandma Abson’s life, her passion for baking and more biscuit recipes on her blog. Head over to Instagram @grandmaabson to see Meryl baking with her grandchildren.