Peter Norcliffe, as part of his Norky's ramblings, reminisces on his holidays as a six-year old, eating ice cream, pretending to have drowned, and getting caught up with the police. 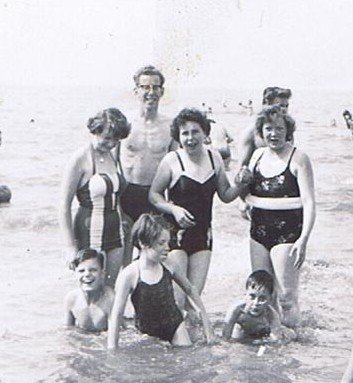 In episode 10, I described a time when I left home to seek my fortune when I was six years old. There was another incident that sticks vividly in my memory from the same year.

We were in our favourite Blackpool for the summer textile fotnit. Mum, Dad, Rhondda and I were amongst the vast crowds that were crammed onto the beach. There was always a long line of ice cream vans along the beach. The crowds gathered between the vans and the breakwater promenade, and anybody wanting to play games and join the donkey rides was on the waterside.

Me and Rhondda decided to play in the sea after first checking which ice cream van we were sat behind. Rhondda thought it would be a great idea if she held my head underwater to see how long I could hold my breath.

After a while, I pretended to be dead and when Rhondda let me go, I floated to the surface. When she pushed me further out to sea, it gave me the opportunity to leap to my feet, if one can leap to one’s feet in four foot of water. “Aha, I’m not dead!” I’d say.

Escaping her talons, I went to find Mum and Dad, knowing it must be time for an ice cream. They weren’t there. Assuming I had checked behind the wrong van, I applied a little logic and started at one end and worked my way behind each one. I think there were about ten vans in all. Mum and Dad were still not to be found.

I then wandered up to the promenade and must have looked lost and forlorn, or hungry at least, asa kindly elderly gentleman (he was probably about 30) took pity on me. He volunteered to take me to the police station.

I soon found myself sat on a bench near the sergeant’s desk. I think there were about four of us lost souls waiting to be collected. The thing I also remember well is that one of us four was a black girl of about my age. This was very unusual in Blackpool in 1954.

The little lass began to cry. The desk sergeant didn’t like this noise in his station and said, “If you don’t shut up, I’ll put you in that room”. He was pointing at a room where the door was slightly ajar and the room was in darkness.

The police were regarded as people we didn’t mess with back then. Our experience was of tall characters dressed in dark clothing who were always willing to scowl at boys. Just in case we were doing something; doing anything really. I imagine the police constables of today would love to turn the clock back to an era when it was alright to scowl at kids.

We were petrified; there could have been anything in that darkened room – a huge, snarling three-headed dog at least. By this time my bladder had taken on the dimensions of a bucket. If crying had made the desk sergeant grumpy, imagine what a puddle on the floor would have done.

We all sat there in silence and increasing discomfort. It had even taken my attention away from how hungry I was.

Luckily a knight in shining armour in the shape of Dad came into the station. The desk sergeant held out a police benevolent fund collection box, to which Dad was asked to contribute a tanner (6d) to take me away. Dad thought about it for a time-honoured length of time then paid up.

I pleaded with him to show me the nearest drain to empty my ‘bucket’, and when we found one the flow went on forever. Dad had a good laugh, and often reminded me of how he thought it was like a dray horse. But I didn’t care. By-eck I did feel better for it. He liked to remind me of the tanner it cost him as well.

The skill of swimming didn’t seem to feature much in our household and I don’t think I’d ever seen Mum or Dad swim. Perhaps it was because we are at least 60 miles from any coast, but there were plenty of opportunities in the two town centre swimming baths, local spas and reservoirs. Instead we favoured little day trips with relatives to play cricket.

I was actually twelve years old before I really managed to swim, again at Blackpool, and again in the sea. Rhondda was experimenting with the holding my breath thing again, but she took me further out to sea so I couldn’t leap to my feet this time. I could have been scarred for life.

In fact, I have been scarred for life – the incident when she accidentally managed to drag my face along the road, described in the “knacklers and erry cart” ramble. And also a few years later when she less-than-accidentally threw me on the fire, which has ensured that at least one of my ten head scars was Rhondda’s doing.

We battled a lot when we were kids. I would sit on her favourite chair when she had just temporarily vacated it, or annoyingly hang around when she wanted a private moment with her boyfriend. I would periodically tap her shins with my steel toecap sandals to show her that I was still alive, and she would hold my head under water or throw me on the fire.

The fire incident happened when I was playing with my train set on the hearth rug in the posh front room, I was deliberately annoying Rhondda while she was trying to impress a friend, eventually she boiled over and kicked me headlong into the fire. Even after all this time, we still have a good laugh about it.

She was bossy and I refused to be dominated. I just wouldn’t do as I was told apparently.

The main photo at the top of this article was taken during one of our many family holidays by the sea. Rhondda and I are the two on the left. Rhondda seems to be planning how to hold my head under water again without anybody noticing.

I love Rhondda dearly. No really, I do, honest. And it appears she loved me too.

The good thing about our battles was that it was bouncing back from them that put me in good stead for my years playing Rugby!