Norky rambles about his rock 'n' roll music tastes, skiffle groups, and different bands at the time like the Phantoms 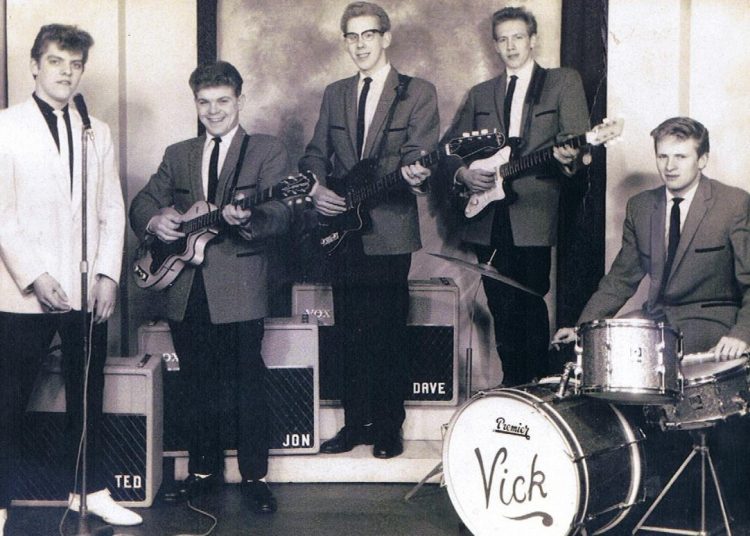 As my big sis Rhondda is five years older, and strangely enough, always has been, I was greatly influenced by her choice of music, and during her teenage years 1955 to 1962 there was an explosion of pop (popular) music aimed at, and performed by, the young. As the country was recovering from WW2, and rationing was still very much biting into everyday life, much of this choice of music was a protest deliberately aimed at the establishment. This kind of statement of opposition and protest through music has gone on for generations.

An example today would be rap music, which I cannot understand nor appreciate. But, of course, it isn’t aimed at me – in fact, it’s deliberately written to break free from old fuddy-duddies like me. I’m sure rap artists would be mildly upset if I did like it. Fortunately, nowadays young musicians don’t depend on us oldies for their income. It was different in Mozart’s day. When Emperor Joseph II criticised the young composer for being too intense and using too many notes, tremors will have been felt in the financially fragile Mozart household.

Skiffle comes to Britain and the guitar is the star

Jazz from the US became very popular and from this skiffle developed. Lonnie Donegan’s Rock Island Line was a great hit. It is said the he was the first performer to introduce the guitar as the main focal instrument into Britain.

In 1958, John Weatherby, Rhondda’s boyfriend, now husband, joined the Comets, a skiffle group. This photo was taken the year after and was pretty much the standard of the day: all acoustic guitars, no drums, John on the left playing bass/rhythm on an acoustic six-string guitar, and a tea chest bass, comprised of a tea chest, a brush handle, and a length of string. Some skiffle group rhythm sections used a washboard, which is a wooden frame with a corrugated tin middle section; the player placed thimbles on their fingers and rattled them up and down the washboard. This instrument sounded just like you would expect – a right racket.

The only music shop in Huddersfield at that time was Woods and, as described in a previous ramble, Woods did not look favourably upon the noisy hip-shaking groups of the time, seeing them as being in league with the Devil.

The following photo is of John in his garden posing in his best cool, rock and roll stance.

Guitars were not easy to come by.This is John’s first and it cost 10 guineas (£10.50) from a furniture shop in Huddersfield. This guitar was also my first after John very kindly gave it to me when I was 12 years old.

Ready to rock: amplification and the B7 chord

Initially the budding rock stars of the 50s and 60s played in youth clubs or village halls, but eventually bigger venues meant amplification was required. They could acquire and afford to buy pickups to fit on the body of the guitar, but had to build their own amplifiers, often from valves and speakers destined for the television and radio industry, and of course requiring lots of know-how. ‘Necessity is the mother of invention’ and all that.

John appears to be playing the chord of C. If a player could manage C, Am, F and G, then there were dozens of ballads available at their fingertips (literally).But it was only if they felt really ambitious and learned A, E and B7 that they could consider themselves a guitarist. B7 is an awkward bugger, but if mastered, it opened up a whole new world of rock and roll.

The term ‘rock and roll’originally came from the US jazz world and was used as a metaphor in the 1920s for dancing but also for sex, which of course is another example of pop music rattling the establishment cage.

Radio Luxembourg was where the youth were getting their pop music entertainment, the BBC being very reluctant to embrace the work of the Devil for some time yet. The brighter musicians within the groups would learn the tune, lyrics and chords by listening to them over the airwaves and arranging them for their own groups.

Playing with the Phantoms

John eventually joined the Phantoms, a group that quickly became well established and popular all over the north of England. Their excellent lead guitarist, Dave Hesp, often said that John was accepted into the group because his brother Stuart had a Morris J2 van, big enough for the whole group and their equipment. This is hotly disputed by both Rhondda and John, and I suspect it was just a bit of banter, but a good story anyway. Stuart Weatherby was quickly promoted from van driver to manager until the group needed a more professional agent and management setup.

Dave Hesp was a joiner and made a number of his own solid six-string guitars. He also made John’s first proper solid bass guitar. In 1961, Dave bought a Fender Stratocaster. There were very few in the country at that time and even though the Phantoms had toured and played with many bands, it was the first time they had seen a ‘Strat’other than on a cover of a Buddy Holly LP.

Not only were solid bodied guitars easier to make, they also reduced the feedback that was found to be a problem when playing acoustic guitars through an amplifier. Feedback happens when a sound from a speaker is again picked up by the acoustic body of the guitar and then amplified again, very quickly resulting in a high pitched squeal.

The photo at the top is of the Phantoms taken in late 1961 sporting their new Blonde Vox AC30 amplifiers. Not getting much support in their hometown music shop, the group had bought instruments from Barrett’s of Manchester for some time. Even then, it required Mr Barrett himself to drive to London to pick up these Vox AC30s. The Phantoms were the first group to use these amps after the Shadows.

John left when they turned professional and the Phantoms then toured military airbases in Europe.

At around that time they produced a record at the Joe Meek studio in London. As there was a copyright problem, the Phantoms had to change their name, and it was Joe Meek who suggested ‘The Dynamics’, which was the name they appeared under in August 1964 on Thank Your Lucky Stars. Produced by ABC Television from 1961 to 1966, it was essential viewing for millions of British teenagers. Jimmy Saville introduced them as ‘The Dynamos’. Sadly, it was discovered all too late that Jimmy Saville’s inability to read an autocue was the least of his problems.

Making friends (eventually) with the Spotnicks

I often acted as a roadie on many of the Phantoms’ gigs around the north of England, the most notable being on Wednesday 13 February 1963. Not only did Rhondda give birth to John’s first child during that evening, but Steven was also my first nephew. And, if that wasn’t enough, the Phantoms played at Barnsley Baths alongside the Spotnicks, a Swedish group who specialised in instrumentals, not too dissimilar to the Shadows.

The Phantoms had been playing many of the Spotnicks’ numbers at that time, including Orange Blossom Special, but the Spotnicks’ manager refused permission for the Phantoms to play this particular number that evening. As they were not going to play it themselves – he gave a lame excuse that the building had too much exposed metalwork whichwould interfere with their equipment. The general consensus was that this was rubbish and so the Phantoms played it anyway in their last set.

John described the Spotnicks as initially being very standoffish and superior, but strangely enough after the Phantoms played Orange Blossom Special’, their attitude changed immediately to a very friendly respect, as I think this photo that I took in the dressing room after the concert shows.

Finally, here are the Phantoms in early 1961. Dave Hesp lead guitar, John Weatherby bass, Ted Hawkins rhythm, John Vickerman drums and Roger Wilkins vocals. This was at Ferriby cricket club, Hull, at one of the annual gigs when the Ferriby and Golcar cricket clubs got together for a jolly good knees-up.