They may not have made it to number one, but Leeds band Yard Act boasted the biggest selling vinyl album this week, and it's easy to see why! 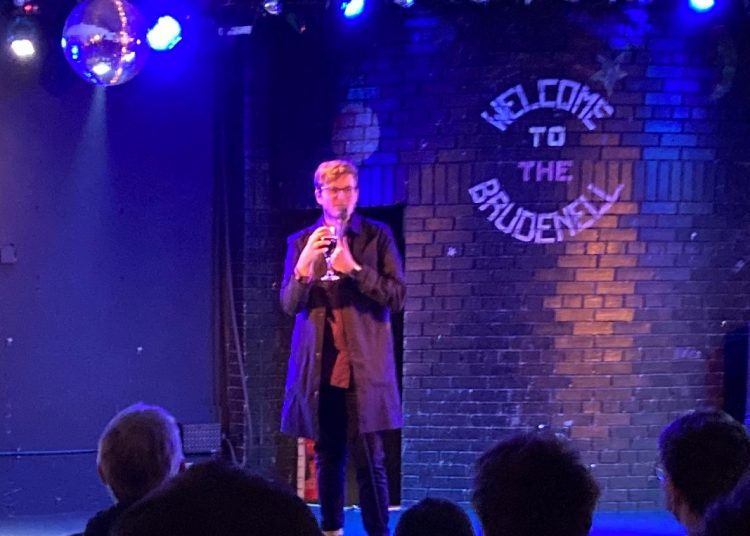 Is this the corporate machine? Or Hemsworth Market on a Wednesday? Given that the albums sold from cardboard boxes in the Brudenell car park almost propelled Leeds indie band Yard Act to No1 on the UK charts, it’s probably a bit of both.

Bias Alert: I love Yard Act. I normally hate everything from Leeds on principle. It has a lot to answer for – terrible beer, naff 80’s architecture and Jimmy Savile takes a lot of living down, despite giving us Jacob Kramer, M&S and Alan Bennett.

The problem for Leodiphobes such as myself is that Yard Act are hard not to like. Their sound echoes northern post-punk icons such as The Fall or Gang of Four with lyrics tainted with the insight of someone who’s spent plenty of time in dark places but still wants us to laugh at the madness.

Why is the UK’s hottest band selling albums in a car park?

In some ways, Yard Act are a product of Covid-19: Formed in late 2019 from the remains of local bands you’d see advertised in venues but never have any reason to go and see, their manager, Oliver, heard their track Trapper’s Pelt and came to the Brudenell to see one of their first gigs.

“I just said we should put out a couple of tracks and see what happened,” he explains as he stamps his feet to try and keep warm. The band are inside, filming a promo as a sizeable crowd forms a grinning, orderly queue. “It’s sort of got out of hand, to be honest.”

In late 2019, Bassist Ryan Needham found himself with nowhere to live and asked James Smyth, former frontman of Post-War Glamour Girls, if he could stay in his spare room for a few weeks. They decamped to James’ bedroom studio and wrote songs. Fixer Upper, the first release from these sessions, went viral during the 2020 lockdowns and was eagerly seized upon by music fans denied gigs, pubs, clubs and thrills.

What’s it like flogging albums in a freezing car park?

It’s hard to work out whether Oliver the manager is excited or scared, but everyone is freezing. The lad smoking roll-ups to keep warm minding the boxes turns out to be the bloke from Island Records.

Though not entirely sure what’s about to happen, he breaks the news that, way above their expectations, they only need to sell a couple of thousand more copies to nick the number one album spot from Olly Alexander’s Years & Years. Such marketing opportunities don’t present themselves very often and, after all, the music business is A Business. Bills have to be paid. People’s jobs depend on it. In an arts sector left for dead by a government who seem to believe that culture either means Glyndebourne, Stately Homes or an excuse to attack the BBC, opportunities have to be snatched.

How do you get people to buy records these days?

It’s hard to make money from music. The days of massive advances and vast fortunes from royalties disappeared at about the same time people realised Oasis had run out of ideas. A million streams on Spotify will earn you about three grand. If you’re a band with a manager, that’s about £600 each.

Needless to say, not many new acts have even that sort of profile.

A quick glance at festival lineups looks like time travel. Same old same old. Nobody buys CDs any more so emerging artists struggle to sell stuff even if they can generate an audience. The vinyl revival offers an opportunity. Which is why we’re in a freezing Leeds car park. You have to be quick on your feet.

“It’s fifteen for the vinyl, five for the cassette, eighteen for the two. Every one counts as a sale. Plus, we’ll throw in custom signed covers.”

If Andy Warhol had come from Hemsworth rather than Pittsburgh, he’d have approved of this take on business art.

Oliver the manager agrees. “Actually it was Rauschenberg that drove cars over canvases”, he corrects. I like him.

The idea had been to drive the crappy gold Rover 200 mentioned in Fixer Upper and featured in most of their videos  (think Luis Bunuel meets The Fast Show) up and down over the covers covered in spray paint. However, this is a Rover 200 doing what they were always renowned for: Not working.

But this is Yard Act. Their manager has a go at spraying the tyre of the stricken car, (“we paid too much for it because I let slip to the bloke that we needed it”) before applying the blank cover. It look quite good to me. It looks even better when the band appear and start signing them, affable and approachable with the faintest hint of rabbits and headlights in their eyes.

Smitten, I buy two, even though I’ve already pre-ordered the album last year and, on impulse, ordered a limited run CD send cassette last week. I am a marketing man’s dream, but haven’t had this much fun in ages.

Inside, from the stage of the Brudenell, James thanks the crowd and, with his customary insight, and cradling a glass of red wine, sums up the whole thing:

People in this game are usually more needy than this. This may be as fun as it ever gets. This is a business. This is work now. The next seven days will be 18-hour shifts of promotion at in-stores, PAs, more social media and interviews. The next year’s gigs are already booked and sold out. Yard Act are not kids. They understand what this means.

That’s what makes them worth bothering with.