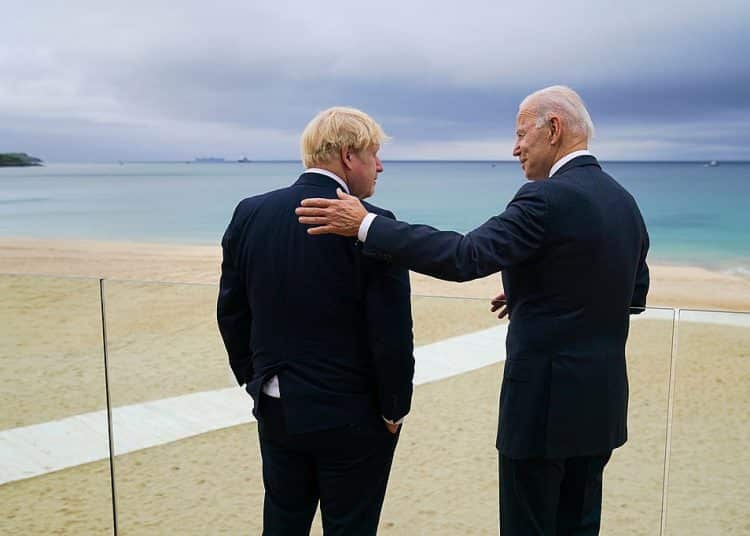 The BBC’s Laura Kuenssberg took Downing Street’s line yesterday morning, claiming the UK government was ‘chipper’ and apparently highly delighted with being given essentially nothing by the US leader after a 90-minute meeting in the White House on Tuesday. Boris Johnson was thrown a few scraps for being America’s dutiful lapdog.

In fact the key things she mentioned – climate cash, the lifting of the travel ban and the controversial submarine deal with Australia and the USA – amounted to little more than thin air.

A UK-US trade deal, virtually the raison d’être of Brexit, seems as far away as ever with the usually optimistic Johnson even admitting Biden has “a lot of fish to fry” before signing a trade deal with Britain, as if the POTUS had recently acquired a Harry Ramsden franchise.

The best the UK government and Ms Kuenssberg could present as something gained from the meeting was that Biden waited until Johnson arrived before announcing another $5.7bn annually to help mitigate climate change in developing countries, essentially doubling it to $11bn. Johnson said the announcement was “game changing”, as if it was all news to him.

But environmental activists say it falls far short of what the US should be spending in any case. The Paris climate accord committed rich nations to spending $100bn annually, a figure that has yet to be achieved.

It seems unlikely that Johnson, the new foreign secretary Liz Truss, and their entire entourage needed a 90-minute meeting with Biden to convince the president to do something he had almost certainly decided he was going to do anyway.

Johnson told reporters on the way to the US that there was little prospect of the US lifting the travel ban on passengers from the UK, saying, “I wouldn’t hold your breath”. He spoke more or less at the same time as the White House was announcing that the ban, imposed by Trump 18 months ago, would be lifted – showing just how far out of the loop he is.

Downing Street then sought to take the credit, even though the ban is to be lifted from early November on double-vaccinated passengers from most EU countries as well as the UK.

The Guardian reported that Johnson had claimed a bilateral “travel taskforce”, had been meeting fortnightly since the summer, but when pressed, his spokesperson was unable to say what it had achieved specifically for the UK, given that the new rules apply equally to a lot of European countries who apparently hadn’t bothered with a taskforce.

The diplomatic row over the submarine deal rumbles on, but the main event was when the announcement was first made a week ago so nothing new there. France withdrew its ambassadors from the USA and Australia over what their foreign minister, Jean-Yves Le Drian, said was “duplicity, contempt and lies” but has not done the same for Britain.

Le Drian explained that this was because France was familiar with the UK’s “permanent opportunism” and said Johnson was the “fifth wheel on the carriage“. A calculated insult but an accurate reflection of our current prime minister.

Incidentally, if you want to understand the French position on AUKUS, this Twitter thread might be useful.

Trade: could the UK join UCSMA?

Although the UK government had said trade was not on the agenda before the meeting, Johnson must have been bitterly disappointed that he had no progress to show, because his spokesperson was briefing that the UK could consider joining UCSMA, the US, Mexico and Canada trade agreement signed last year, according to a report in the FT.

It was raised on BBC Newsnight, with Lord Hannan even suggesting this was a real possibility, until Democratic Congressman Brendan Boyle, who sits on the powerful Ways and Means Committee which oversees all US trade deals told Emily Maitlis, “I haven’t heard one word about that”.

Some seem to be confused so let me explain. About 30% of US trade is with Canada & Mexico. China accounts for another 13%. As for the UK, it is 2.5%, the same as Taiwan, Vietnam, & India. So when some are confused why a trade deal with the UK isn’t a high priority, now you know. https://t.co/W492MUF4gX

And with global Britain being compared to Vietnam, served by a prime minister likened to a spare wheel, the last small hope of getting even a tiny scrap out of the visit was extinguished.