ADVERTISEMENT Figures from today’s Office for National Statistics (ONS) report make grim reading and show that economic recovery for the country is going to be a long, slow haul. The 20.4 per cent fall in the UK economy in April is the largest since records began. All sectors have experienced historic falls, with manufacturing and […] 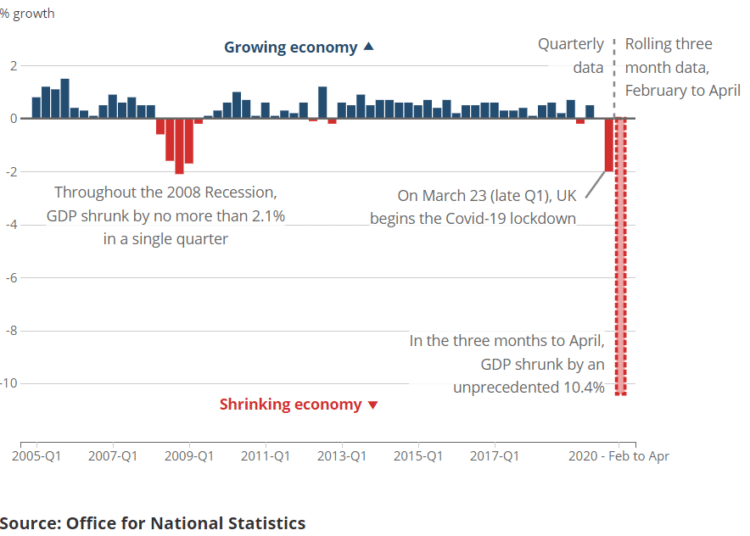 Figures from today’s Office for National Statistics (ONS) report make grim reading and show that economic recovery for the country is going to be a long, slow haul. The 20.4 per cent fall in the UK economy in April is the largest since records began. All sectors have experienced historic falls, with manufacturing and the construction industry taking big hits alongside the service sector (and in particular hospitality).

“April’s fall in GDP is the biggest the UK has ever seen, more than three times larger than last month and almost ten times larger than the steepest pre-covid-19 fall. In April the economy was around 25percent smaller than in February.”

The ONS report also has updated spatial analysis to include all deaths registered and processed so far from March to May. According to the BBC this new interactive map shows that Sheffield’s Fir Vale area has had the highest number of coronavirus deaths in England and Wales.

The economic impact of the coronavirus pandemic is not unexpected. On 9 June Radio Sheffield said that a report to the Sheffield City Region showed a worst case scenario of 14,000 businesses going bust, £4bn being wiped from the regional economy, and 40,000 jobs losses in South Yorkshire as a result of Covid-19.

In a virtual Lords debate on 3 June on the economic lessons to be learned from the pandemic Lord Bob Kerslake, former head of the civil service, warned that hopes of a “rapid V-shaped recovery now seem very optimistic. Lord Kersake who was chief executive of Sheffield City Council from 1997 to 2008 said a major stimulus package would be needed to get the economy moving again.

This economic damage could be long lasting, especially given the number now on universal credit – a record 1.5 million claims were made between 13 March and 9 April, a six-fold increase on the same period last year.

How the government responds to this is critical. Will the chancellor Rishi Sunak raise taxes or will he fall back on the austerity measures that Osborne imposed? While some MPs are keen to see lockdown restrictions lifted to get the economy moving, the role that government plays in terms of fiscal measures will be vital. With tax revenues falling and public spending surging, the Office for Budget Responsibility estimates that government borrowing will rise to well over £200bn this year if the lockdown lasts for three months.

Top economists argue in today’s New Statesman that reverting to austerity measures will just prolong the pain. Indeed, there is much to suggest that the austerity measures have left the UK infrastructure much less resilient and unable to deal with, and absorb, the pressure of a pandemic.

Speaking to the Yorkshire Post today Dan Fell, chief executive of the business organisation Doncaster Chamber, said that infrastructure projects such as those planned for road and rail now needed to be brought forward to provide economic stimulus to drag the economy out of its depression.

Despite the gloomy economic forecast, the government seems set on pursuing a no deal Brexit, with the EU claiming today that Michael Gove has categorically ruled out extending the transition period. The impact of that, following so soon after (or in the middle of) the covid crisis is yet to be worked out, but previous estimates by the Treasury put the cost to the economy of a WTO Brexit at £200bn. In a report released on 2 June, the independent think tank Social Market Foundation warned of a “significant negative impact” on the UK economy if no-deal Brexit and coronavirus are allowed to occur side by side.