John Cole address what it means to "speak truth to power" within the media, and encourages the BBC to hold the government and its ministers to account more often. The BBC, which has now been filled with Conservative appointees, failed to write stories about the covid contracts the government gave out. 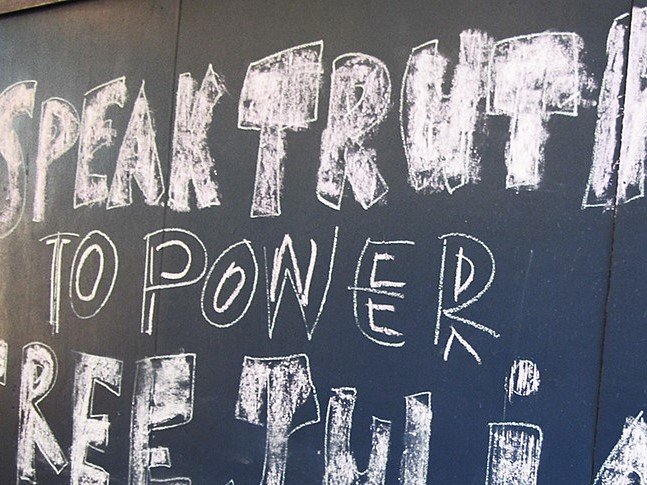 “‘SPEAK TRUTH TO POWER…” by Newtown grafitti is licensed under CC BY 2.0

“Speaking truth to power” is the inspiring call to action of Yorkshire Bylines. The original phrase, from the 1955 document, ‘Speak Truth to Power: A Quaker Search for an Alternative to Violence’, was later appropriated by a global human rights initiative which was headed by the likes of Vaclav Havel, Nelson Mandela, Desmond Tutu and the Dalai Lama.

Now it falls to us journalists, and institutions such as the BBC and the Bank of England, to speak truth to what is possibly the most corrupt and dishonest government of the last two hundred years.

In March, Andrew Bailey, the relatively new governor of the Bank of England, gave a public lecture on the recent economic performance and prospects for the future. In response to the talk, Frances Coppola, the respected economics commentator, posted the following on her blog:

“Much of Bailey’s speech is devoted to the economic reasons for this long slump … It is not just the Covid-19 crisis from which the UK economy must recover. And although the financial crisis threw a long shadow, it was not responsible for the GDP growth rate flatlining in 2017–19. That was caused by Brexit.

“It has become taboo to say, or even imply, that the Brexit vote of 2016 was in any way negative for the UK economy. If the Bank of England governor had dared to say openly that the primary reason for four years of stagnation prior to the Covid-19 shock was investment collapse due to Brexit, he would have been accused of making political statements. But it is the truth.”

Jacob Rees-Mogg, Mark Carney, and the taboo around Brexit economics

If the governor of the Bank of England feels inhibited from speaking truth to power, then journalists and the public are in trouble. Bailey is most likely mindful of how his predecessor, Mark Carney, was savaged by Jacob Rees-Mogg, an ardent Leave campaigner. At the 2017 Conservative Party Conference, Rees-Mogg lashed out at Carney, saying:

“Mark Carney has opposed Brexit the whole way through, and is an enemy of Brexit … He’s shamed his role because he’s become a partisan. He quite disgracefully intervened in the referendum campaign, by giving forecasts one way or another.”

Here we have a senior politician with easy access to the media bad-mouthing a public servant who, by virtue of his position, had no right of reply. In short, this was bullying.

The BBC have a duty to hold the government to account

George Monbiot’s recent article in The Guardian asserts that, “the media are allowing this government’s cronyism and dishonesty to flourish”. He draws to light the role that the BBC should play in “holding ministers to account”.

Monbiot gives the example of the test and trace contracts given to Serco and to “unqualified teenage call centre workers”, pointing out that the BBC didn’t cover the story, and “like most of the press, has been asleep for the past year”.

The article also pays credit to Byline Times, in particular Patrick Howse, a former BBC journalist, for being just one of two media outlets that covered the story of government contracts for friends and party donors. Howse’s article has a similar thrust to Monbiot’s.

Monbiot also points to the reluctance of the BBC to cover the Jenifer Acuri story, which seemed to have strong elements of Johnsonian corruption and abuse of power. Howse’s view is that the affair has been covered “…only grudgingly, and at the margins of the BBC’s huge range of output”.

He does, however, suggest that their actions were “completely consistent with the corporation’s desperation to avoid a fight with the Government … Top BBC managers are absolutely terrified of the Government and are bending over backwards to appease it”.

For many of us, the BBC’s failure to speak truth to power has been deeply disappointing. So should we be holding the corporation in contempt? It is only fair to point out that there are mitigating circumstances.

Conservative employees in the BBC

Howse first acknowledges that the BBC’s upper echelons have been filled with Conservative appointees; first and foremost the “director-general himself and the chairman”. Patrick Barwise and Peter York’s book, The War Against the BBC, records the 30 percent public funding cut to the BBC services in the last decade.

For over a decade, but increasingly in the last five years, Conservative politicians and others on the political right have sniped at the independent broadcaster. Ten Downing Street is ruthless in seeking to control the political narrative.

Even more concerning to those who value the BBC, are the current manoeuvres to appoint someone sympathetic to conservatism as the new head of OFCOM (the broadcasting regulator). The Daily Telegraph headlined their article on the issue, “Paul Dacre is just who OFCOM needs to challenge the BBC’s liberal left bias”. Challenging the left bias will not be difficult for Dacre, who was, for years, the hard-nosed, hard-right editor of the Daily Mail.

One of the people who will decide who is to chair Ofcom is Paul Potts, a leading journalist for Rupert Murdoch’s Times group of newspapers. Potts is also a friend and former business associate of the minister for media and data, John Whittingdale, a man whom government sources said had a declared intention “to whack” the BBC.

What would those who truly spoke truth to power think of the contemporary media?

What would Havel, Mandela, Tutu and the Dalai Lama make of all of this? They would recognise it as the thin end of the wedge and a worrying step closer towards the UK becoming like Hungary, Turkey and Poland.

Of course, the UK is still a long way from the totalitarian control of the media of Russia or China, but it is far from a healthy freedom of press situation. When a government starves its independent broadcaster of funds, loads it with the extra costs of TV licences, and packs its board and the regulating authority with political appointees, there is clearly cause for concern.