Alex Toal analyses the difficult tightrope that Chancellor Rishi Sunak has to walk in advance of the G7 summit in Cornwall, balancing his desire for a special relationship with Biden with that of maintaining his vision for deregulation Britain. 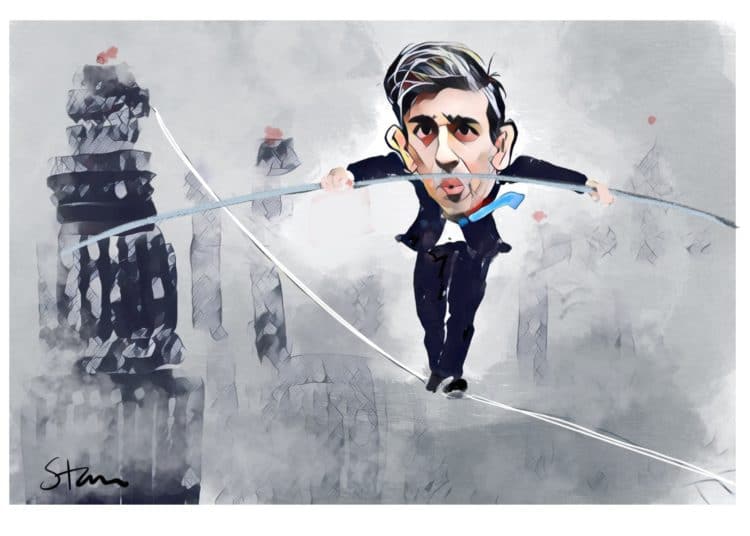 If there is anything that has so far defined the career of Chancellor Rishi Sunak, it is the triumph of spin over substance. Already at Yorkshire Bylines we have written about his masterful public relations strategy around the generally meaningless budget, and of the invention of Sunak’s personal brand as the approachable, smiling, ‘Keynesian’ chancellor. Sunak has once again pulled off such a coup in advance of the G7 summit in Cornwall.

A staunch opponent of President Biden’s corporation tax plan, the chancellor successfully talked the US president down to a mere 15 percent minimum rate.

However, the spin out of the agreement was remarkable. Rather than the deal being publicised as Biden dragging Sunak kicking and screaming to agree a baseline rate, Sunak portrayed himself as leading a historic victory of the state against big tech.

Now, as the G7 heads to Cornwall, Sunak is pushing for an exemption for the City of London. From a policy perspective, this is of course highly problematic. While small businesses would be on the hook for the new tax minimum, large financial service companies would be given an unfair advantage on the global stage. Throw into the mix the question of how you define a ‘City of London’ firm, and Sunak’s proposal seems to undermine all of Biden’s work.

What is more interesting, however, is what this says about Sunak’s politics. The special relationship, as far as it ever existed, is more important aesthetically than substantively. Tony Blair’s friendship with George Bush made Britain seem more influential on the world stage, just as Theresa May’s awkwardness with Donald Trump reflected how imbalanced the UK-US relationship had become.

The two-party system of both countries also makes this more interesting. Since Democrats can be equivocated to Labour and the Republicans to the Conservatives, tension exists when a Democrat is in power at the same time as a Conservative, or vice versa.

Ed Miliband famously flew to the US to meet with Obama in 2014 in a bid to make himself seem like a prime minister in waiting. George W Bush’s rebuffs of Michael Howard damaged the Conservative leader’s image.

The battle for Biden

As such, there is a clear competition within UK politics currently to win Biden’s approval. On the one hand, Starmer sent a member of the Labour front bench to Biden’s inauguration, and Rachel Reeves has spoken with Biden’s political team about how to improve Labour’s economic offer.

On the other hand, it is clear that Johnson feels awkward about his portrayal as ‘Britain Trump’. After Biden’s win, Johnson was criticised for his hesitancy in congratulating the new president, and the labelling of the prime minister as a “shapeshifting creep” by Democratic podcaster Tommy Vietor quickly established a narrative of Johnson vs Biden.

Thus, the G7 represents an important opportunity for Johnson and Sunak to mend this aesthetic divide with Biden. If the pair can reflect to their domestic audience that they have more in common with the liberal Biden than Johnson’s last No10 guest Victor Orban, they can potentially assuage nervous voters in leafy suburbs that they are not voting for Britain Trump.

This leaves Sunak with a difficult choice. Either he can push for his programme of deregulation and freeports, or embrace Biden’s plans, bolstering his own standing and that of his party.

However, if we have learned anything from the past year, it is that Rishi Sunak is a very skilled politician. Having already spun his concession on global tax rates as a success, his next step is achieving a substantial enough concession on the City that he can still pursue his deregulation fantasy.