Things clearly aren’t fine and dandy up north. Last week it was Nissan, this week there’s the closure of De La Rue, the printing firm that lost the contract to print the tacky black British Brexit passports last year, and now the one to print bank notes. 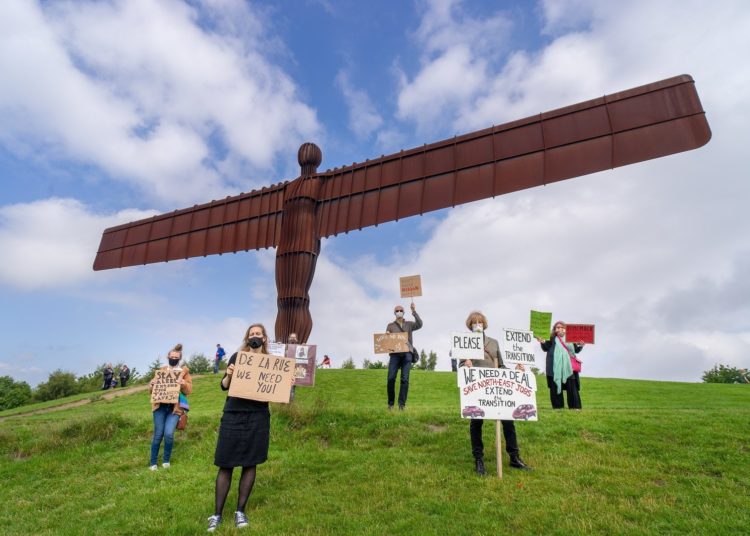 Protesters at the Angel of the North Photo credit: Adam Lang

It’s very tempting to ask Antony Gormley how much paint would be needed to cover his 65-foot tall Angel of the North with its wingspan as wide as a Boeing 767. And how much it’d cost to slap red, white and blue on it. No doubt a lot less than the £900,000 for tarting-up the prime minister’s plane.

Things clearly aren’t fine and dandy up north. Last week it was Nissan, this week there’s the closure of De La Rue, the printing firm that lost the contract to print the tacky black British Brexit passports last year, and now the one to print bank notes. Little wonder then that the locals are beginning to wonder whether Brexit promises are all they were cracked up to be.

The Confederation of British Industry (CBI) stated that Brexit would affect the North East the worst. CBI director general, Carolyn Fairburn, said it was impossible for businesses to prepare for Brexit in the middle of a pandemic. The report by think tank Best for Britain into red wall seats, published this week, painted a similarly dismal picture of job losses, decline and serial crises.

A spokesperson for the Angel of the North protest that took place today, Kim Sanderson, said it would make far more sense to deal with one crisis at a time: “Whichever way you voted in the EU referendum, it was not to lose your job or be worse off.”

The government is rattled and, in anticipation of the impossibility of businesses preparing for the impact of a no-deal Brexit, apparently has a £4.5m plan to groom us. In a few weeks’ time, new slogans telling each of us to make sure we are personally prepared for no-deal will be brought to us via a gormless media. Carefully targeted ads will be spat out across social media. So now it’s clear: the government is not responsible for the economic mess facing us, we are responsible for not preparing ourselves adequately to deal with it.

This is rather baffling as the government has already spent billions on Brexit and can’t or won’t tell us what comes next. They do know we don’t want a US trade deal complete with food laced with stuff that’s bad for us – we outlawed it when we were in the EU.

No one knows what to expect or how to prepare. Even the legions of small businesses expecting never to re-open can’t prepare. We can protest at the absence of government guidance and contingency plans. We can deplore the government’s lamentable stupidity and gross irresponsibility of piling economic ruin on the great economic hardship many already experience. But we cannot prepare. We can’t boot the government out in time to avert this.

All we know is that the government has done a really lousy job of managing Covid-19 and Brexit. So to detract from our understandable lack of faith in it, the government is putting the onus for the horrors ahead on us. It can’t hide behind whoopee trade deals, as other states’ leaders won’t play the PM’s game. As Kevin Rudd, Australia’s former prime minister said, this is all “utter bollocks”.

A sentiment echoed in Gateshead. The North East’s unemployment rate was the highest in the country at 5.4 per cent in January to March this year according to the Office for National Statistics. The outlook is grim whichever you look at it. The hope that many shared when the Angel of the North was erected has evaporated. Statues may express something of the Zeitgeist at the moment. However, few doubt that the hope expressed by the Angel’s contemporary, Damien Hirst’s ‘Verity’, has been squandered. He described her as a modern allegory of truth and justice. In 2022, she will leave Ilfracombe in Devon. In the meantime, no amount of slogans and no amount of paint will cover the crevasse into which the government is about to plunge us. Brits to the slaughter sums it up.