Steve Keen's book 'The New Economics: A Manifesto' covers neoclassism, debt, and financial crashes like the Great Depression and Recession 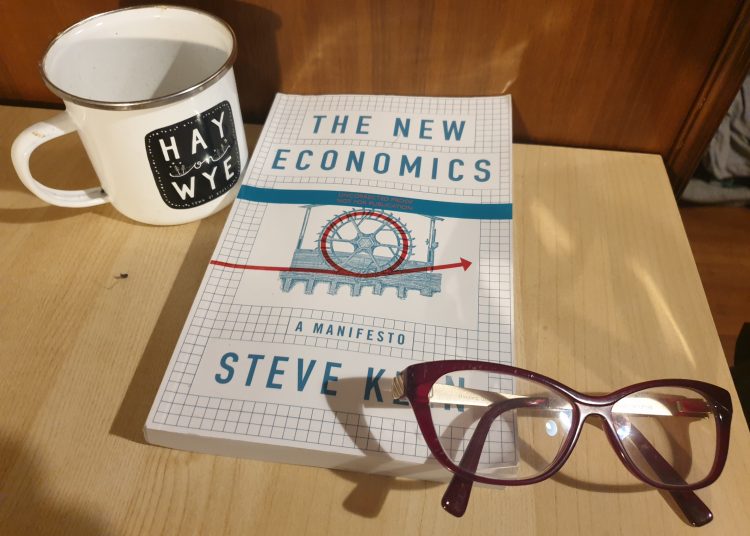 The New Economics a Manifesto, photo by author

In 2017, I invited then Kingston University economics professor Steve Keen to the Green Party Conference in Harrogate, because he was the only expert I’d seen even attempt to address the clearly still growing crisis of rising private debt, with his proposal for a modern debt jubilee.

Keen went down a storm at conference, and I think he enjoyed having an audience where starting from the assumption that mainstream, neoclassical economics has a disastrous, demonstrably nonsensical, approach was taken as read, without any need for argument.

The New Economics: A Manifesto

For those who still need persuading, however, Keen makes the argument, in sweeping forensic detail, in his new text, The New Economics: A Manifesto, showing how its entire foundations rest not even on sand, but on fantasies.

One of its most obvious, and practically crucial errors is how the approach established in academe and government for decades ignores banks, private debt, money and credit, despite these being absolutely at the centre of the 2007/2008 financial crash.

In a single graph, starting from the ‘Panic of 1837’ (huge at the time), he also covers the Great Depression and the Great Recession, showing how on each occasion credit plunged from a historically high level, turned negative and remained so for a substantial period. The only time where this outcome was avoided was when wars drove private debt down dramatically. So, by the end of the Second World War, private debt had been driven down to just 40 percent of gross domestic product (GDP), from a peak of 144 percent in 1932. He concludes drily:

“We should find a better way of doing so than another world war.”

That’s just one way in which Keen tears neoclassical approaches to shreds. He’s also big – and crystal clear – on how mainstream economics has a deeply methodologically flawed dedication to linear models, relying on the assumption that equilibrium is a natural state for the economic system. He quotes Einstein:

“The supreme goal of all theory is to make the irreducible basic elements as simple and as few as possible without having to surrender the adequate representation of a single datum of experience.” [Keen’s italics]

He points to the OECD in 2008 predicting a fabulous economic year, based on the Dynamic Stoachic General Equilibrium Model. And yet still this is taken seriously, and used!

Lots of Keen’s thinking draws of physics, such as his debunking of the neoclassical project to reduce macroeconomics to applied microeconomics, quoting physics Nobel Laureate Philip Anderson:

“The ability to reduce everything to simple fundamental laws does not imply the ability to start from those laws and reconstruct the universe … The behaviour of large and complex aggregations of elementary particles, it turns out, is not to be understood in terms of a simple extrapolation of a few particles.”

Economics students are the target audience

This is not, as that brief outline makes clear, an ‘easy read’ book directed to a reader looking for a quick briefing. I’m not in this brief review going to get into its mathematics and equations. In fact, I’ll admit to once or twice taking the author’s advice and taking a coffee break on particularly dense theoretical sections.

This book has a clear main intended audience: the students who now face – despite the best efforts of student and academic campaigners – disappearing at all but a few universities on to the conveyor belt of academic acceptance and advancement that requires embrace of the neoclassical approach. He’s strong also on the sociology of his profession, noting that new academic theories seldom win over adherents to the old, invested as their careers, publication and knowledge are in the status quo. He would rather see the young gravitating towards the obvious improvement, leaving the old to fade away.

But there’s still a great deal for readers who don’t fit that profile to get from this book. I particularly enjoyed his exploration of the crucial – and by the neoclassicists entirely ignored – importance of energy in economics (reminiscent of Kate Raworth’s Doughnut Economics). And his brief foray into an alternative history imagining how the world might be different had the 18th-century physiocrat economists, rather than Adam Smith, been the ‘fathers of economics’, is inspiring. They asserted – correctly as modern physics demonstrates – that without the “free gift” of nature there would be no production at all, and that production cannot be without waste.

Keen’s origins, like my own, are in Australia. Just as I’m often accused of displaying Australian-style bluntness, he’s not a man to suffer fools gladly, producing some wonderful anecdotes.

I’d love to have been a fly on the wall when, at a conference, he responded to a distressed young neoclassical economist propounding a ‘rational expectations’ model that people had a model of the economy in their head that enabled them to accurately protect the future, and which also renders government policy ineffective. When Keen dismissed this, the young man said, “But we have to make some simplifying assumptions!” Keen reports: “My response cast over my receding shoulder, was ‘Mate, you have to learn the difference between a simplifying assumption and a fantasy’.”

It is perhaps no surprise that Keen now chiefly functions through the crowdfunding site Patreon, rather than in an academic context. As he points out, heterodox economists, a diverse but creative bunch, have found toeholds only in a handful of less fashionable institutions. The largest and richest universities remain hidebound, narrow-minded havens of neoclassical orthodoxy. (I’m reminded of the Cambridge man who when I pointed to Cambodian garment workers fainting from hunger as a sign the current system wasn’t working, said no this was good, it meant they’re at maximum efficiency, being paid enough for their labour to keep them alive.)

For economics students who want to be part of the future, not like the dusty Ptolemaic scholars sitting in dark corners while the Coperinicans blazed ahead, this is an essential read. For anyone who wants to see what a new economics truly needs to look like, this is a must on the bookshelf. And for me, there’s some powerful tales in here that will certainly find their way into speeches in the House.

Boris Johnson's government - bought as easily as a holiday villa